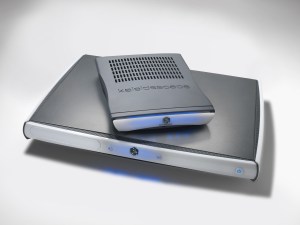 Kaleidescape has established itself as a well-known entertainment server in the homes of video aficionados for more than five years. Its $14,000-plus movie jukeboxes can store an entire library of DVDs on an array of hard disks. Next to the yacht and the private jet, a Kaleidescape System with hundreds of DVDs on it is a staple in the homes of Silicon Valley gazillionaires. (I have three myself — not).

Now the Sunnyvale, Calif.-based company is moving up the vanity ladder with the launch of movie players that can show DVD movies that are “upscaled” to 1080p, or more than twice the resolution of a typical DVD. (Upscaling means to take a video image and to enhance it with video-processing techniques so that it looks sharper. The video processor mathematically matches the DVD image to fit a wide-screen high-definition TV image). As such, Kaleidescape says that its upscaled DVD playback matches the quality of Blu-ray movies, which also play back at a resolution of 1080p.

“Many people won’t be able to tell the difference between upscaled DVDs and Blu-ray,” said Linus Wong, product development director at Kaleidescape.

I’ve seen upscaled DVDs and the video quality is truly stunning on a big home theater screen. (Kaleidescape isn’t the first to come up with these by any means; many upscalers take images to 720p resolution, which isn’t as good as 1080p). The edges of objects on the screen are sharp and colorful.

The Kaleidescape Systems use a futuristic interface where you can use a remote control to scroll through an array of movie-jacket covers as you pick the movie you want to watch. Jed Putterman, a San Francisco software executive, told me a while back that he enjoyed the quality of DVD movies on a big screen so much that he returned a Blu-ray player that he bought. A high-end video dealer, David Raife, owner of Paragon Technology Group in Aspen, Colo., echoed that comment in a statement from Kaleidescape.

In a closely watched battle with the movie industry, Kaleidescape won the legal right to copy DVDs to its hard drives so that its customers could quickly and easily access the movies. It has sold several thousand of its hard drives arrays over the years.

But the company hasn’t yet said whether it can get a license to do the same with Blu-ray disks. (It has told its dealers it will have a Blu-ray solution in 2009). Hence, Kaleidescape has a vested interest in making sure that DVDs remain the movie format of choice.

By enhancing the resolution of DVDs using its special video processors (from Sigma Designs), Kaleidescape can breathe new life into DVDs. For high-end video consumers, it means they won’t have to throw out their DVD libraries just to get the highest-quality video images on a home theater screen.

And for Blu-ray, it adds a new hurdle for the newest video format to overcome. Stan Glasgow, head of Sony’s U.S. electronics division, told me earlier this year that Blu-ray won the war with HD-DVD but still had to overcome the satisfaction that many people have with upscaled DVDs.

The $4,295 Kaleidescape 1080p Player takes up one rack in an entertainment center and includes the ability to import DVDs and CD-ROMs onto a hard-disk array (sold separately). A mini version will be available in July for $2,995. That one doesn’t include the DVD/CD-ROM drive. One of the cool features is that the Kaleidescape players can bookmark the exact spot where a movie starts, clipping off the FBI warnings and previews.

Kaleidescape is privately funded and has 140 or so employees.