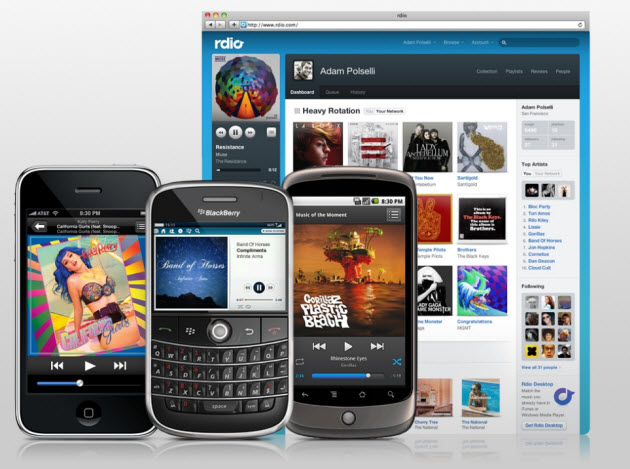 Rdio — pronounced r-dee-o — has some spelling problems. But it is a very ambitious startup that hopes to liberate consumers from some annoying restrictions when listening to online music.

The San Francisco company, brought to you by the creators of the Kazaa music service and Skype internet voice calls, is creating a new social music service that stores the music you listen to in the cloud and feeds it to your devices as you want. The company, which was partially outed in December, is formally coming out of hiding today.

The benefit of the cloud service is that you can play your music on any device you want; by contrast, with Apple’s iTunes music, you are permitted to play music that you have purchased only on a limited number of devices. The music can be accessed via a web browser. That’s a pretty good benefit, and one that is worthy of the company’s founders and their pedigree. 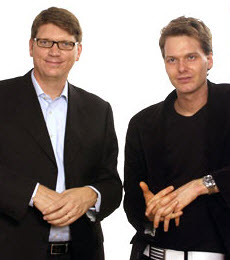 Kazaa, as well as Napster, helped bring down the traditional industry of music CDs. I suppose it’s only fair that the folks behind Rdio — Janus Friis and Niklas Zennstrom — are creating this online music startup to try to rebuild the music business. (Atomico is also helping to fund the company). The company is worth watching, because when Friis and Zennstrom (pictured) do something, they usually shake up the world.

Rdio has another twist on the usual 99-cent-per-song business model. It will offer subscriptions of $4.99 a month for an unlimited number of songs from a collection of 5 million songs from the major music labels (that’s roughly half the number of songs available on Apple’s iTunes). It also offers a $9.99 a month subscription if you want to listen to your music on mobile phones. Besides iPhones, you will be able to listen to the music on BlackBerry phones via an Rdio app. An Android version is coming soon.

The social side of the service is another differentiator, said Drew Larner, chief executive of Rdio and a Skype veteran. You can listen to your own purchased music as well as the music purchased by your friends. Rdio encourages sharing and so it helps with the discovery of new music, alleviating some of the burden on musicians to market their own work.

Rdio has launched a small beta testing program and is expanding by letting users invite their friends. So for now, it is available as an invitation-only paid preview program.

“Many digital music services have tried to address specific challenges, but no one has managed to elegantly integrate discovery and a high-quality music streaming experience under one roof,” said Friis. “We think people are ready for the next evolution in music. Rdio gives you unlimited access to all the music, anytime, for the equivalent price of one album download per month.”

One of the things that Rdio has gotten right is taking the manual effort out of discovering new music and building a digital collection. Within seconds, you can “import” your iTunes songs. But that doesn’t literally happen. Rather, Rdio compares your iTunes collection to what it has in its own cloud-based music collection and then gives you access to those songs. You can use Rdio to see what your friends are listening to and sync music to your phone to enjoy when you are offline. You can share music via email, Facebook or Twitter. The company hopes to appeal to people who like to be pacemakers when it comes to keeping up with the latest cool music.

Rdio has deals with music companies EMI Music, Sony Music Entertainment, Universal Music Group and Warner Music Group, as well as many indie aggregators of digital music. It seems those companies aren’t holding a grudge against the founders of Kazaa, which you could argue wrecked the Music 1.0 business.

“The music industry’s transition to online distribution has been dominated by à la carte sales,” said Mike McGuire, analyst at Gartner’s Media Industry Advisory Services. “But, there’s a big opportunity for companies to create paid music services that are based in the cloud – especially as more and more consumers own smartphones allowing them to access their entire online music library via phone.”

Besides Larner, Rdio’s management team includes chief operating officer Carter Adamson. Malthe Sigurdsson is responsible for Rdio’s user experience and design, and Todd Berman leads engineering. The company, founded in early 2009, has 23 people and has not disclosed its funding, beyond noting that investors are Zennstrom, Friis and Atomico.

Rivals include Pandora, Spotify, Rhapsody, Microsoft’s Zune and a number of other online music services, not to mention Apple’s iTunes. Apple is expected to move into the cloud music service business as well since it bought Lala (and then shut it down). We’ve written about realted startups such as Immitter, Imeem, Grooveshark, MOG, and HypeMachine.