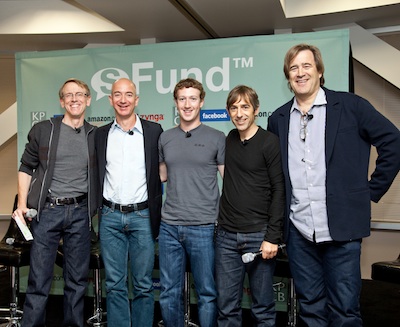 Is Kleiner Perkins Caufield & Byers’ social push coming too late? The venture firm just announced the creation of a $250 million sFund for investing in “social Web” startups, but 2010 seems like the wrong time to be jumping onto that bandwagon.

Kleiner partner Bing Gordon will be leading the fund. In an interview after the firm’s press conference, he acknowledged that many investors think social networking has peaked. That’s not the case, he said. Instead, there are going to be “tectonic shifts” next year as older Internet companies try to keep up with their more socially-oriented competitors.

All of Kleiner’s consumer Web investments for the past year have involved social networking in some way, Gordon said.

As for creating a specialized fund, Gordon said some of the firm’s partners wondered if they should continue investing in social startups without making a big deal about their bet on social. On the other hand, there was an opportunity to bring some famous advisors on-board and to make a big splash with a new fund. (Gordon and Kleiner partner John Doerr were joined on-stage today by Amazon’s Jeff Bezos, Facebook’s Mark Zuckerberg, and Zynga’s Mark Pincus.) That way, Kleiner will be on the mind of any entrepreneur with a cool social idea — and also on the top of Google searches related to that topic.

Beyond predicting the possible destruction of the dinosaurs, Gordon talked about more positive trends. For one thing, he said users’ work lives and social lives will continue to merge. I asked if he agreed with Zuckerberg’s controversial statement that “you have one identity” (i.e., that it’s hypocritical to keep your work and personal identity separate), and Gordon said he didn’t have a “thesis on identity.” Still, he argued that more openness is usually good for the workplace, and that “siloed information leads to politics.”

Gordon also predicted the merging of mobile and social services. In fact, he said there’s a good chance that the sFund and Kleiner’s iFund for iPhone and iPad investments might make investments together.

In addition to Kleiner, Amazon, Facebook, and Zynga, other investors in the sFund include Comcast Interactive Capital, Allen & Company, and Liberty Media. Gordon said Kleiner’s share is a mix of funds already raised and some new money, although he didn’t get specific.