AOL has announced that it has bought social network Bebo for $850 million in cash. It’s easy to be skeptical and say that this is an also-ran internet conglomerate buying a second-tier social network. But AOL has been trying hard to buy and merge its way into relevancy — and Bebo is most certainly relevant and could be a good fit with AOL’s other efforts.

First, some background. Last December, we reported that the social network had hired investment bank Allen & Co., either to help it sell itself or to raise another round of funding. Then, Bebo was adamant that “there is no truth” to any acquisition rumors. But Bebo was keeping that option on the table. In fact, AOL and Bebo have been in talks for the last five months. Also, with this deal, investor Balderton Capital made back nine times its investment in less than two years, doing quite well for itself. More on that in a moment.

So here’s how the acquisition could make sense: San Francisco- and London-based Bebo is a respectable social network. The site has 40 million total (not monthly active) users, and they spend an average of 33 minutes per day on the site, Bebo claims; Comscore says it has 22 million unique monthly visitors. The site is far smaller than market leaders Facebook or MySpace, but it has executed well on multiple fronts.

For starters, it provides ample security features for its mostly teenage user base — something Facebook and MySpace have had more trouble with.

Bebo has also gone out of its way to work with large media companies and third-party developers.

Last year, it introduced its “Open Media” platform, designed to let a traditional media company — like AOL-Time Warner’s Warner Bros. movie studio — run its own content within Bebo, using its own media player and making money from its own advertising (our coverage).

Bebo was also the first large social network after Facebook to launch a functional developer platform for third-party applications. It licensed Facebook’s own platform, but redesigned it to be interoperable with Open Social applications (our coverage). Third parties like virtual world Gaia Online have recently seen their applications gain traction within Bebo (our coverage).

Now, Bebo will be the “the cornerstone” of AOL’s online strategy — although details are still vague on that front. AOL points out that between Bebo and its instant messaging services AIM and ICQ, it reaches around 80 million users (I assume that’s total users, the companies aren’t clear on that point). Somehow, AOL plans to circulate users from Bebo to its network, and use its “scale to grow Bebo’s audience.” PaidContent has more details from a conference call on the deal this morning.

AOL, meanwhile, has been laying off thousands to try to refocus its organization. It has already made nearly $1 billion in online advertising acquisitions alone, and it even finally revamped AIM to be a sort of platform (our coverage). The company claims its far-flung — some might say piecemeal — web network has been seeing five consecutive months of page view growth. It has articulated a strategy of building a lot more sites, which we thought sounded like quantity over quality (our coverage). For example, AOL is planning to launch 17 international web sites and expects to expand to 30 countries by the end of this year.

Bebo has also said that it plans to launch localized versions in five countries — the two companies say Bebo will feature prominently in AOL’s launch strategy going forward. So maybe Bebo will be the glue that binds AOL together, although I’d love to see specific examples of how that will resonate with users.

The dealmakers are pictured in the image above. From left to right: Randy Falco, Chairman and CEO of AOL, Joanna Shields, President of Bebo, and Ron Grant, President and COO of AOL (photo via Business Wire).

Here’s some context around Bebo’s decision to hire Allen & Co. last fall. There’s evidence that interest is waning from large hedge funds to pump more money into consumer companies now that the economy is flattening or even in contraction, and new sources of advertising could run dry.

But Bebo did well to hang in there as long as it did. Less than two years ago, Benchmark Capital’s European fund, now called Balderton Capital, and some smaller investors gave $15 million to Bebo, at a valuation after the investment (post-money) of $98 million, VentureBeat has confirmed. It owned a 15.7 stake in Bebo, and with the company valued at $850 million, Balderton earns about nine times what it invested in Bebo. It takes home about $140 million.

It also showed how holding out can be a great benefit even for a third-place player like Bebo. MySpace, the market leader, in terms of number of users, sold for $580 million, suggesting it sold too early.

Bebo is the latest example of a big, scary bet by venture capitalists on a consumer internet company that shows significant traction by adding users, but which isn’t making a lot of money — and where investors pump money into them at huge valuations of between $50 million and $100 million pre-money. Other examples include Photobucket (backed by Trinity), and others that haven’t sold or otherwise returned a profit yet, including Facebook (backed by Accel), Flixster (backed by Lightspeed) and Slide (backed by Founders Fund and T. Rowe Price).

Update: Kara Swisher has more on Bebo’s revenue. She says:

According to the several sources who were privy to Bebo’s financials … Bebo’s revenues for 2006 were only $7 million with $3 million in EBITDA (earnings before interest, taxes, depreciation and amortization). In 2007, the results are still small, with $20 million in revenues and $5 million in EBITDA. 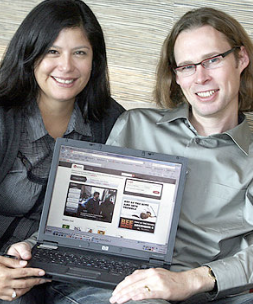 Some other early investors in Bebo tried to encourage the company to sell last year, scared that Facebook was growing so quickly that Bebo might be left in the dust. However, we’re told by sources that Balderton’s Barry Maloney advised the company to stay the course and hold out for a better offer.

The other notable trait about the company is the husband-wife team. Like the couples that led Cisco and VMWare, Bebo’s team of Xochi and Michael Birch (pictured left) proved they could execute as great entrepreneurs, even if many VCs stay away from backing family-oriented companies. The two were always focused on the product and making it the strongest possible, iterating quickly to make it better. Bebo early on differentiated itself by becoming a safer place for kids to network — more aggressively focusing on security and shunning any trace of pornography. Its user base was always a little younger than the other networks, and its safer atmosphere helped it gain favor among parents. The Birch’s are serial entrepreneurs, however, and are likely to head out from AOL in short order.