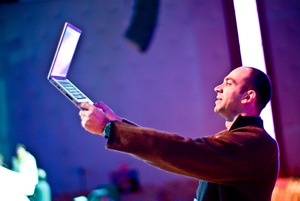 I didn’t go to Le Web. No offense to Parisians, but I much prefer visiting Europe in the non-winter and non-conference months. Still, I know some folks who were headed there with much excitement, so I figured I’d tag along virtually (can one still use that expression?) via blog and Twitter feeds. After all, it was Europe’s largest web 2.0 conference, with 1,800 entrepreneurs each forking over €1,500 for the chance to demo their startups and meet with their peers from around the world.

Show and tell your internet business…without the internet

But it seemed like at least through the first day of the two-day conference, which ended today, I could hear just barely more than the sound of crickets from overseas. I have to admit I was kind of worried; was this year’s Le Web some sort of bizarre plan to hijack a handful of the Valley’s thought leaders, get them drunk and force them to participate in some sort of hack day?

Ok, maybe that was a little wishful thinking. The real explanation was far more banal: Attendees had no internet access for the length of at least the first day of the conference. Yep, as The Guardian’s Paul Carr so aptly put it, during that first day, “LeWeb was entirely without the web. Which I suppose makes it simply ‘Le.'” Consequently, “entrepreneurs were told they’d have to demonstrate their internet businesses without using the internet.”

Predictably, the snark wasn’t completely lost with the web access. According to Carr, “BoomTown blogger Kara Swisher … encourage[d] attendees to relocate to California ‘where we have warm sun and the internet’ while TechCrunch‘s Michael Arrington threatened to send his writers home early given that they couldn’t actually file any reports.” And I noticed that, as of the time this article was written, even hyper-blogger Robert Scoble didn’t post anything new on his blog since the day before he started attending the conference. Perhaps that’s because, according to Carr, Scoble, who was sitting on the judges’ panel for the startup competition, was “openly playing Solitare while yet another poor entrepreneur stumbled through his web-less pitch.”

Oui Oui, there were highlights

But it wasn’t all that bad, apparently. Eventually, Google’s Marissa Meyer graced the conference with some advice about smart hiring (recruit people who are smart and get things done). There was also the revelation that Google’s Chrome browser was leaving beta testing behind (though is still not available for the Mac) and that Google’s SearchWiki experiment would gain an “off” button.

In startup land, there was the interesting company viewdle, a facial-recognition powered platform for indexing, searching and monetizing video, which took the big prize at the pitch competition.

Still, folks (including myself) were a bit perplexed with the fact that the event organizer, Loic Le Meur, opted to stream the conference (plus or minus the technical difficulties referenced above) using Ustream, rather than via his own video platform Seesmic.

All in all, sounds like attendees had a fun Parisian time at the day-end parties, where it was probably a bit warmer than in the widely-reported chilly conference hall.