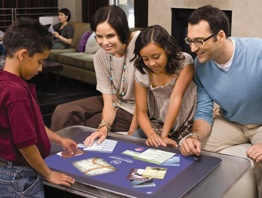 Not a lot of Microsoft products give off that “cool” vibe (sorry, Zune). But Microsoft Surface, its multi-touch computer, does. It’s a giant, 30-inch tabletop display that simply looks sexy. As such, it was really no surprise when the Rio hotel and casino in Las Vegas installed one last month, but now the device is set to invade more hotels around the country: Sheraton hotels.

Sheraton hotels in New York City, Boston, Chicago, Burlingame (near the San Francisco airport) and Seattle are all set to receive the device. The hotels will have customized versions of the Surface which will run special software programs for each hotel’s local area. Microsoft highlights three of these applications:

CityTips. At the guests’ fingertips are the Surface 360-degree satellite maps and tools to search for local restaurants and bars, entertainment, recreation, shopping, transportation and services, such as banks and pharmacies. Guests can discover all a city has to offer by simply moving their hands across Surface.

Sheraton Snapshots. Guests can explore Sheraton hotels and resorts throughout the world by simply browsing the Surface photo library of Sheraton resorts and hotel properties to help them plan for future business or leisure travel.

The Surface certainly seems like it could be useful in hotel lobbies, particularly the CityTips application. It’s also good branding for Microsoft utilizing a technology, multi-touch, that many people including myself are bullish on.

This rollout comes several months after the one initially planned for the end of 2008, but Microsoft now has its Surface in quite a few places. Beyond the Rio and these Sheraton hotels, you can find the Surface in AT&T stores in multiple cities in California, Georgia, New York, Texas and Washington D.C. and it’s also featured in the Tomorrowland area of the Disneyland resort in Anaheim, Calif.

Interestingly, there may be a Surface software development kit (SDK) in the works, All About Microsoft’s Mary Jo Foley hears. For now however that will likely be confined to commercial applications, as the Surface, at $10,000 or more, isn’t exactly priced-to-own for most consumers.

There is another, more affordable technology Microsoft is working on called LaserTouch. It powers the TouchWall, which Microsoft showed off in May and could become a candidate for a multi-touch computing experience in the home.

On a side note, I’ll be in Vegas this weekend and definitely plan to check out the Surface at the Rio (shown in use below). I still find it humorous that it was placed in a bar called iBar, which reeks of Apple branding.