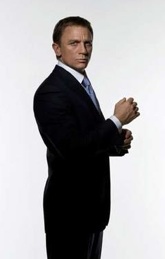 Today, the new James Bond film, Quantum of Solace, opened in the United States. I’ve been waiting for it ever since I left the theater after seeing the last one, the great Casino Royale. To temper my excitement, I decided to download the James Bond – 007 application for the iPhone. All I can say is that I hope the movie isn’t as lame as this app is.

The app is good for exactly one thing: Watching mediocre behind-the-scenes videos in fairly poor quality on your phone. If, like everyone else, you can wait to watch those until the DVD comes out in a few months, there’s no need to get this app.

The other “features” include a synopsis of the movie (wow!), cast bios (double wow!), filmmakers’ bios (wow beyond belief!) and a link to find the new Bond theme song by Jack White and Alicia Keys on iTunes. No, you can’t preview or hear the song within the app itself.

Here’s what this app is: An advertisement, as GigaOm notes today. It’s not like this hasn’t been done before, it has with films like The Dark Knight, but at least that app allowed you do so something somewhat fun: Edit a picture with Joker graffiti. This is more akin to the Pink and Snow Patrol apps launched a couple weeks ago to promote those musicians’ new albums. Both apps were pretty weak.

If you have Bond fever and are unable to catch the movie at some point today, feel free to check out the free app here — but don’t expect much. 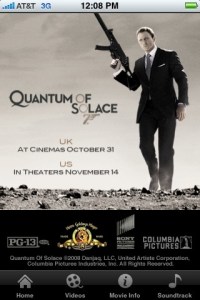 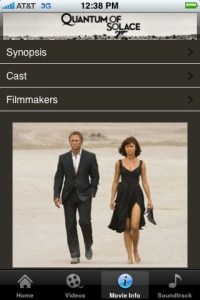