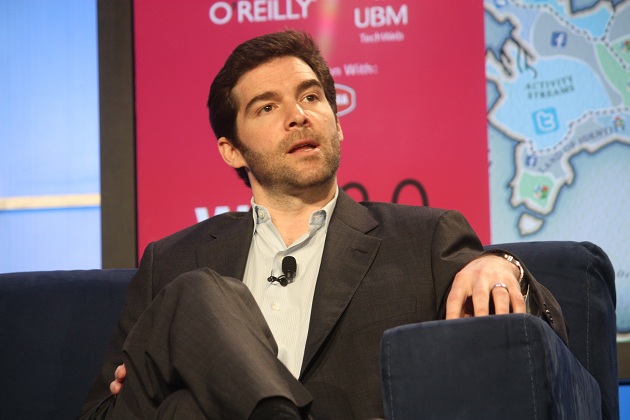 For those who don’t know, Weiner explained that keg stands are the fraternity-like drinking gags where someone holds you upside down and you proceed to drink from a beer keg. These are not the kind of photos you want your potential employer to see and they are littered across sites such as MySpace and Facebook. The need to separate your networks of family, personal friends, and work acquaintances is why LinkedIn works so well, Weiner said.

This prompted me to search for any pictures of Weiner doing a keg stand. I couldn’t find any.

LinkedIn has more than 85 million users now and a market valuation in excess of $2 billion. The company is private, but sites such as SharesPost calculate valuations based on what employees sell their shares for on the secondary market.

While Facebook has more than 500 million users, Weiner sees potential for more growth on a worldwide basis. He’s not scared that Facebook will create its own professional network because of the keg stands issue.

“I cite the keg stands as a cautionary tale,” Weiner said, speaking with John Battelle on stage at the Web 2.0 Summit in San Francisco.

LinkedIn makes money from advertising, subscriptions for premium privileges, and hiring solutions. The latter has become the biggest revenue source in the last year and they enable company recruiters to use LinkedIn in a targeted, very successful way.

The growth is accelerating as users find that LinkedIn is useful beyond keeping contacts updated. It took 477 days for the company to hit its first million users. The last million users, in the move from 84 million users to 85 million, took just nine days, Weiner said.

Weiner said he isn’t tempted to invade Facebook’s space. Adding pictures, for instance, would only happen if there was a way to use them to make people more productive.

Weiner said instead that the company is very interested in mining its data in different ways. Improving the ability to search within the context of a professional network, for instance, could turn out to be a lot more useful for people looking for answers on professional questions. In contrast to a general search engine like Google, a professional search engine could yield much better answers for people needing a particular kind of result, he said.

LinkedIn is very interested in servicing what Weiner called the emerging “talent economy.” That means that the thing that will be important for professionals in the future is not to know everything there is to know. Rather, it will be important for people to surround themselves with people who have the right knowledge. LinkedIn wants to connect those people and fuel the talent economy, Weiner said.

Weiner said he was focused not on doing a successful initial public offering, as is so often rumored in news stories about LinkedIn. Rather, he says he wants to focus on getting critical mass on a global basis, where size really matters.