Despite the hype surrounding young, serial entrepreneurs, most company founders are typically above 30 and have only started one company, according to the latest study by professional network LinkedIn.

The company hosts more than 100 million public member profiles, which means there’s quite a bit of useful information to be gathered if you look hard enough. LinkedIn Senior Data Scientist Monica Rogati narrowed down the study to tens of thousands of startup founder profiles, and in the process came across some insights that may surprise you.

When it comes to education, technical majors dominated (except civil engineering). “While computer engineers find it easier to start companies in their areas of expertise, building a bridge or hospital requires a different approach,” Rogati wrote.

The study also found that most entrepreneurs went to business school, with Stanford, Harvard and MIT Sloan leading the pack. The figure stands in contrast to well-publicized college dropouts like Zuckerberg and Bill Gates.

Rogati notes that founders in the study were highly mobile in previous jobs, staying for around 2.5 years, compared to the national average of 4.4 years. That figure alone is interesting, since it points to a certain amount of restlessness that leads people to start their own companies.

Do you have what it takes to be an entrepreneur? Take DoubleClick founder Kevin O’Connor’s quiz and find out. 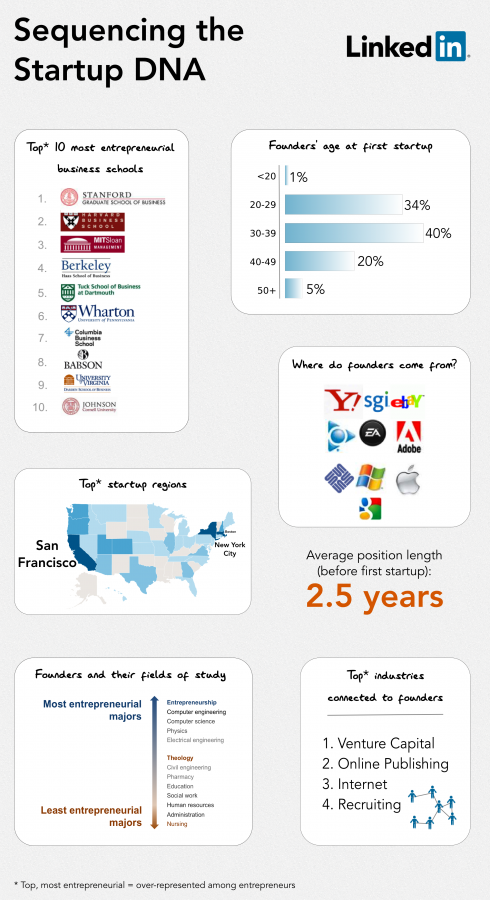