The next step in LinkedIn’s evolution is taking place with the launch today of its redesigned flagship mobile app. Codenamed “Project Voyager,” it offers a dramatically revamped experience, along with LinkedIn’s continuing focus on helping you with your professional journey. The company is taking the next steps in better understanding the mobile generation and has built an app that does one thing really well: helps you stay informed about your connections.

Over the past few months, LinkedIn has been releasing several standalone apps — each geared toward specific things. Whether it’s an app to better connect you with your coworkers, or to help you manage and interact with groups, or even one to help distribute content externally, the company is slowly getting the hang of a multi-app strategy, something that Facebook and Google quickly adopted.

Onstage at the company’s 2015 Talent Connect conference, chief executive Jeff Weiner described Project Voyager as the “dashboard for your professional life,” and — looking at the finished product — he’s not far off. From my experience using the app, it’s much cleaner and more organized than the LinkedIn app of the past. Whereas the previous version seemed to be a hodgepodge of different components strewn together as company made acquisitions or incorporated new services and advertisements, here, everything is in an intentional place. 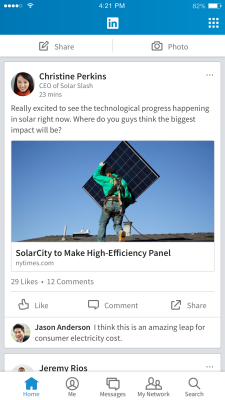 The app is broken into five core value pillars, according to Kiran Prasad, LinkedIn’s vice president of engineering. These are things that members may want in their daily lives.

The first is the Home Feed, which isn’t about connections, as you might expect, but more about interests. As you go through the onboarding process with the app, you’ll be prompted to select specific topics, subjects, and influencers you want to know more about.

You won’t find things like a connection’s work anniversary, what group someone has joined, new skills they’ve added, or whether someone has a birthday. It’s actually about news you care about, whether you’re into photography, app development, venture capital, artificial intelligence, or whatever else. Also notable is the inclusion of content provided through LinkedIn’s influencer program and curated via Pulse — it doesn’t feel forced, as it did with the old version. 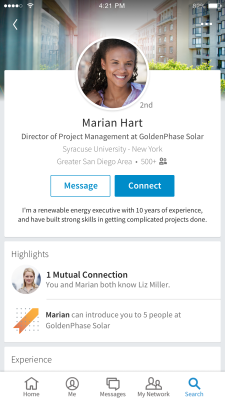 After the home section, it’s all about you. The Me area is where you’ll see all the activity around your profile, including who has viewed your profile, what has happened with your latest posts, who has endorsed you, and more. Think of this as a notification section for your self-esteem. Prasad told VentureBeat that this area is the place to manage your personal brand, and also “to help measure your reputation around the world.”

While you can see all the activity taking place around your every move on the social network, you still cannot publish long-form content to the site beyond a status update.

In the event that you want to communicate with other LinkedIn members, there’s also an updated Message system, which brings it in line with the revamped tool that was released in August. The interface is more conversational, like what you’d expect with Facebook Messenger, Google Hangouts, WhatsApp, and other instant messaging services. “It was really hard to get to the messaging part in the old app,” said Jonathan Redfern, LinkedIn’s vice president of product for its flagship app. “You couldn’t really use it like a messaging app, so bringing messaging to the forefront [in this new version] is showing where on LinkedIn people can go to chat.”

Previously, the interface was rather plain, making it seem like you were sending an email, as opposed to the rapid-fire conversational style that the mobile age has become accustomed to. But now, this feature has been modernized so users can talk amongst themselves freely and privately. 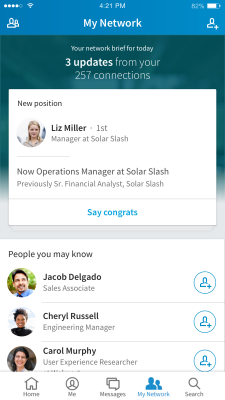 So what happened to all the incessant notifications about suggested users you should connect with, and network updates? Those are in the fourth, and aptly labeled, My Network section. This is the area that features the latest changes to your connections and is displayed in a card fashion — you can swipe left to dismiss the card, or you can take an action like sending congratulations for an anniversary, new job, etc.

“We’ve heard from people through user research that people wanted to know what’s happening in their network,” explained Redfern. “It’s hard for people to keep up with it — when people change jobs, you want to know; when it’s someone’s birthday, work anniversary, or when you’re about to meet someone…it helps you build and nurture your network…”

In the old version, LinkedIn’s mobile app contained an ever-present search bar, but now it has a dedicated Search section. While the feature does the same thing — search — the real updates are in the technology behind it. Prasad said that query processing is much faster (said to be improved 300 percent) and also smarter. It takes into account who you have meetings with, when you met them last, and more to provide relevant search results. You can also search for companies, jobs, and even by stock symbols.

In a search for “VentureBeat,” the app displayed not only the company page, but groups that were similar (the VentureBeat company page was first because LinkedIn knew my profile lists VentureBeat). Additionally, I can sort based on people who work at the publication and see what available jobs there are, as well.

It’s about always being informed

The release of this updated app is thanks to Weiner’s dual responsibility as CEO and head of product, a role he inherited following the departure of Deep Nishar in 2014. As LinkedIn’s public face and leader, it’s his job to demonstrate that the service benefits the Economic Graph and that there’s value in using the professional social network.

One need only look at chatter taking place on Twitter or across the Internet to note the growing confusion about the value of LinkedIn. Since Weiner’s tenure as product lead began, the company has been rolling out a multi-app strategy to optimize the app and show users the real value that it can provide them. Redfern said that Weiner has brought forth a “renewed focus on the member.”

“We started to unpack [LinkedIn’s] product portfolio and look through it from the lens of the member’s value proposition,” he said. “We got a crisp insight into what the flagship app should do for the member.”

The recent changes in the app were informed by the use of research data. Redfin explained that, because 70 percent of LinkedIn’s members are international and don’t use email the way those in the U.S. do, a new messaging format and user interface was needed. Additionally, the company discovered that 55 percent of its traffic came from mobile devices, exceeding the 50 percent threshold that indicated to LinkedIn that it was time to put most of its focus on the mobile-first space.

To put things into perspective, the current iteration of LinkedIn’s mobile app was launched more than four years ago, thanks to the work of eight engineers. Now the company has invested considerable resources and hundreds of its engineers to create a new app that it hopes will entice users to repeatedly come back to the professional social network.

We’re told the idea behind LinkedIn’s mobile strategy is that of a solar system. In this scenario, the “sun” is the company’s flagship app, around which everything revolves, and which represents the center of your professional universe. From there, you have different “planets” orbiting, including the likes of Elevate, Lookup, Groups, services for recruiters, salespeople, and much more.

The goal of this revamped LinkedIn app is to educate you on all the things you’re interested in, while also providing you useful insights in advance of any meetings or connections you’re going to make. From there, it’s all specialized within the myriad of different apps within the ecosystem.

It’s a good start and will help to unify everything for LinkedIn, but will it provide enough clarity to allow professionals to be more effective in their networking? That’s up to you to decide.