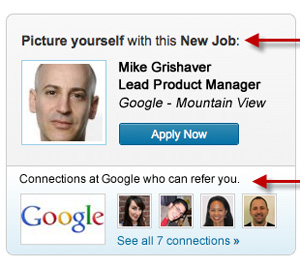 A new feature on LinkedIn called “social ads” has been modified to take out user photos after it attracted the attention of several blogs. The feature allowed the social network to place users’ names and pictures into contextualized ads that other users could see. While the feature wasn’t brand new, the setting was turned on by default.

A LinkedIn blog post today poured water on the controversy by saying it had heard the complaints and that photos would be removed from ads. The post also took pains to remind users that LinkedIn does not “share personal information with third-party advertisers” and only uses publicly viewable data.

Complaints about social networking features being turned on by default are nothing new. Facebook was criticized recently for turning on a facial-recognition feature by default and Google Buzz was targeted for revealing people’s email contacts without their consent.

For context, LinkedIn changed its privacy policy and launched the “social advertising” feature back in June. But many users, myself included, did not read the text of the updated 6,400 word policy or the company blog post that introduced social ads.

LinkedIn’s social ads (like the example shown in the picture above) allowed other users see your face and name in advertising. Users clearly were not happy to see this turned on by default because that made it easy to miss. Social network users prefer to have the option to opt-in to a service rather than having to dig through settings to opt-out.

Even without profile pictures being used, we would still recommend opting out of the service because it attaches your name to some advertising. To do so, follow these directions via Steve Woodruff:

1. Click on your name on your LinkedIn homepage (upper right corner). On the drop-down menu, select “Settings”.
2. From the “Settings” page, select “Account”.
3. In the column next to “Account”, click “Manage Social Advertising”.
4. De-select the box next to “LinkedIn may use my name, photo in social advertising”.

A screen capture from LinkedIn’s settings panel describing social advertising is below: