LinkedIn has released a standalone app aimed at helping you better know your coworkers. Called Lookup, this iOS, desktop, and mobile web app is what the professional social networking company hopes will be the new company directory — and the start of its foray into the enterprise space.

For those with a geographically distributed workforce or medium to large business, LinkedIn Lookup could be helpful. The app was conceived as a solution to the Intranet problem these companies have: existing solutions just aren’t effective. 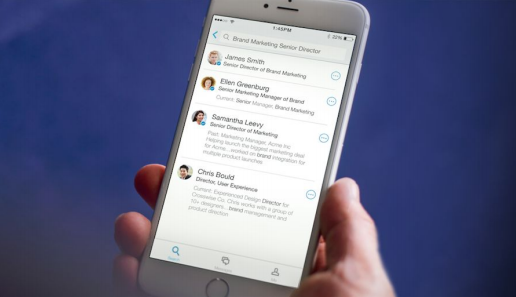 Ankit Gupta, cofounder of Pulse and a senior product manager at LinkedIn, told VentureBeat that Lookup isn’t trying to replace the Intranet, but it is all about making it easier to find a particular person in your company and learn more about them. Through the app, you can search people by name, using a photo, or by a particular skill, title, or place of employment.

If you’re thinking that this is just LinkedIn unbundling the search feature from its core app, you’re mistaken. The idea for a standalone app came about from a study that showed users were trying to use LinkedIn’s search just to find information about their coworkers. “There’s unmet demand to make this better and help realize the value proposition,” said Gupta.

In LinkedIn’s core app, if you search for anyone in your company — Joe, for instance — you’ll receive a lot of results with that name. However, Gupta says that Lookup will cut through the noise, find the Joe you’re looking for, and display his profile within a few seconds. If you are looking for someone outside your company, you’ll have to use LinkedIn’s main app. 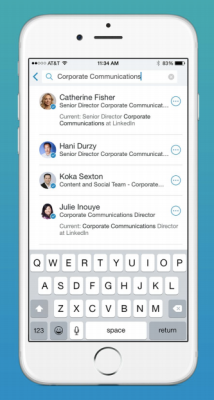 Once the app is downloaded, users will enter their work email address before getting sent a verification code. Upon being verified, users will see a directory of all the current employees working at their company (as listed on their LinkedIn profile). But what happens if someone has left a company but hasn’t updated LinkedIn? Gupta shared that any coworker can flag that account, and it will be removed from the company directory.

Lookup’s usefulness comes in when you’re searching for someone but don’t know their name. So if you’re looking for a product manager, type the title within the app, and it should spit out names that fit the bill. Then you have the option of sending that person an email, calling, or texting them. You can also send them a message via LinkedIn (the recipient doesn’t need to have Lookup installed).

Only the public information you’ve shared will be available on Lookup. Gupta told us that the app will pull in data from LinkedIn, but updates made in Lookup will not be pushed back into LinkedIn. Why? Because there are some fields, such as a person’s phone number, that don’t need to be shared with the larger LinkedIn community. 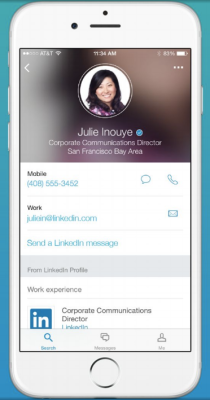 Gupta acknowledged that Lookup isn’t going to be suitable for every business: “It’s pretty clear that this app thrives in a large company. When Pulse was smaller, we used a Google Sites page as an Intranet for 25 people. As the team grew, and when there were different departments, it became very clear that people weren’t sitting together and connecting by coincidence. We felt a need for something like this to help us…it’s for the companies that are growing very fast…”

It’s interesting that LinkedIn is addressing a problem within the enterprise. We asked Gupta if this was an indication of future movements, similar to Facebook’s foray into the workplace. He wouldn’t provide specifics, only to say that there’s “lots of opportunity in the future.” However, it’s easy to see how the professional social networking company could be dipping a toe into the water with this move to help organizations better communicate with one another.

Lookup can “evolve into a much bigger player in the [enterprise] space and be a much bigger connective tissue across your employee base,” said Gupta. Right now it fits in with other standalone apps that LinkedIn has for the enterprise, including LinkedIn Elevate and LinkedIn Recruiter.

Although Lookup is available for iOS devices as well as both desktop and mobile Web, an Android version isn’t quite ready yet. It’s coming soon, we’re told. Also Gupta said that if you’re a developer and want to integrate your service with Lookup, LinkedIn is interested in talking about potential updates.