First of all, they’re buried way down deep in Twitter’s interface, a sort of forgotten feature that isn’t easy to find. They’re barely manageable, with a single never-ending screen of names that you need to scroll through in the order they were added, and they’re not really social, although you can share them. They’re so neglected that as of this moment, Twitter’s search tool for finding new people to add to lists doesn’t even work. 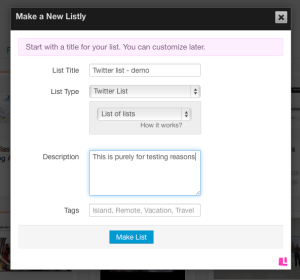 Nick Kellet of Listly wants to change all that.

He wants to make Twitter lists findable via Google, sortable, manageable, and social, so that many people can collaborate in building the best Twitter lists imaginable. And on Wednesday next week, his startup will release a new feature to do just that.

“We make it easy for people to create highly useful Twitter Lists that others can contribute too or just consume,” Kellet told me. “Curating great content is easier if many people participate.”

Listly currently makes lists on just about any topic.

The company sees lists as a media form — just like videos live on YouTube, slides go to SlideShare, audio is on Soundcloud, Listly thinks that lists should live on its site. And, of course, in embeddable form all over the Internet. The startup currently hosts about 16,000 lists on dozens of topics, and some of its most highly trafficked lists have been viewed about a million times, Kellet says — while being embedded in thousands of locations around the Web.

The big thing, though, is that once you’ve made a Twitter list in Listly’s interface, it’s a truly social object. Others can view it, link to it, share it, embed it — if you permit — and most important, add to it and rank its contents. Interestingly, when I made a demo list, purely for testing purposes, within a few minutes it had at least one addition that I had not included: 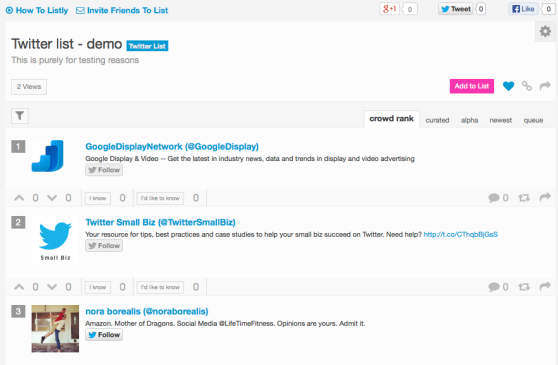 In addition, I can sort the list by crowd ranking, by curation, by alphabetical order — try getting any of those on Twitter — and by newest or oldest members of the list. The implications, for those who might want to build or just use live Twitter lists that are updated and maintained by more than one person, with their limited perspective and limited time, are fairly significant.

Just like anything else that’s crowdsourced, all of us know more than just one of us.

If, of course, you can find it the lists feature on Twitter.

“We have more of an MMPG [massively multiplayer game] mindset,” Kellet told me, comparing Listly’s solution to Twitter’s. “Curating great content is easier if many people participate.”