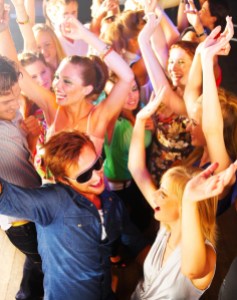 Starting today, Facebook is rolling out a new feature that will let you listen to music along with your Facebook friends.

In other words, if your buddy Wilma is rocking out to Frankie Valli on Facebook via Spotify, you can click a handy little “Listen With” button and rock out with her.

“Being able to click on someone’s music and play it is a great experience, but knowing that you helped a friend discover something new … is awesome,” said Facebook CEO Mark Zuckerberg when the Listen With feature was previewed at a developer conference last year.

As Facebooker Alexandre Roche writes on the company blog, “You can listen to the same song, at the exact same time. So when your favorite vocal part comes in you can experience it together, just like when you’re jamming out at a performance or dance club.”

Not only can you and Wilma listen together; Wilma’s other friends, like Fred and Barney, can also join in and listen along, with Wilma acting as DJ. It sounds a bit like Turntable.fm without the awesome avatars and addictive game mechanics — but with, you know, 800 million people signed up as users. 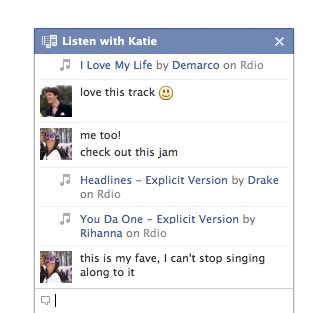 “Only the people you’ve shared your listening activity with can see when you’re listening with a friend,” we read in the relevant Facebook Help section.

“You can control privacy settings in music apps when you install the app or on your App Settings page after you’ve installed the app. You can also remove songs you listened to from your timeline on your private activity log.”

We’ve known about this feature since f8, Facebook’s developer conference last year, when the company announced it would start integrating music and movies with listen-along and watch-along functionality. We wouldn’t be shocked a bit later in the game to see a Watch With feature allowing friends to use Facebook as a sort of group movie night experience.

Have fun and happy listening.