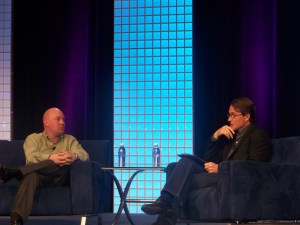 (This is a continuation of live blogging from the Web 2.0 Expo at the Moscone West convention center in San Francisco) On the second day of the Web 2.0 keynotes, John Battelle of Federated Media is interviewing Internet wunderkind Marc Andreessen, the CEO of Ning, a maker of social networking platforms. He is, of course, the man behind the original Mosaic web browser and (once upon a time) wildly popular Netscape Navigator browser.

Andreessen recently raised $60 million for Ning, giving the company (which lets people build their own social networks) a valuation of over $500 million.

Battelle noted that the cable companies and other media companies have all piled into the Internet now.

“The good news is the future for most forms of entertainment is now the Internet,” Andreessen said. “By and large, the media companies are still unprepared, which is ironic given how much time they have had to prepare. Newspapers are in absolute freefall from a business standpoint.” 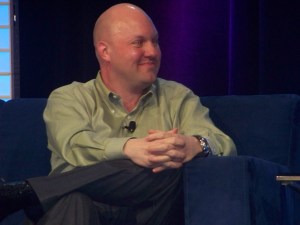 Netscape, he recalled from his own experience at the early browser company, launched several businesses. Free browsers, fee-based versions, and web tools. It took off like a rocket, had a great initial public offering, and then Microsoft came into the browser market. Andreessen noted, “And they used my code from the University of Illinois.” He got a laugh out of that. The company had to sell out to AOL in 1998, largely as a failure. The browser turned into Mozilla, which turned into Firefox and it’s now gaining traction as the alternative to Internet Explorer.

What might have been, Battelle asked? If there was one big surprise, Andreessen said, it was how many early ideas have lasted, like Javascript. Even the “back” and “forward” buttons on browsers and “bookmarks.”

Before Ning, Andreessen had founded Opsware, which makes it easier for corporations to run their computer networks. He scored again, after scoring with the Netscape IPO, when Hewlett-Packard agreed last year to buy Opsware for $1.6 billion.

Battelle notes that Andreessen blogs and opines. He asked Andreessen to opine on Microsoft. “Wonderful company,” Andreessen quipped. Microsoft has been arguing that it’s not the “bad guy” anymore and that Google is the one to worry about. Is it defanged, Battelle asked. Andreessen said Microsoft is still very powerful but there are certainly a lot of “counterweights” to Microsoft. “There are new kinds of companies,” he said. The landscape is splintered and diverse. He thinks the Yahoo deal would add a lot to Microsoft and both would also be good separate. It’s sad that Yahoo would go away but it is part of the natural evolution.

“Are there opportunities for a lot of new companies?” Andreessen said. “Yes. The underbrush of the valley keeps on growing.”

Battelle congratulated Andreessen on his funding, which Batelle said was uncovered by a “blogger.” That would be Anthony Ha of VentureBeat. Writing afterward on his own blog, Andreessen said it’s nice to have money for the coming “nuclear winter.” He said he meant the financial woes in the stock market, which can cause a spiral down.

Ning, a platform for setting up new social networks, is adding 1,500 networks a day and millions of users. “We built Ning to be a general-purpose, programmable platform,” he said.

Regarding Google’s challenge to Facebook, OpenSocial, Andreessen said Facebook did an amazing thing of rolling out the social-networking platform for third-part applications to run it. We are at the early days of understanding the implications for advertising, he said. That spurred OpenSocial, he said. Facebook is getting more open about its platform, “and directionally that is the trend and so a lot of people like us will implement both OpenSocial and the Facebook platform,” he said.

Battelle said that Ning will be in the advertising business. Having control over content could be important. Andreessen said that depends. “We reserve the right to run ads alongside those networks,” he said. “You can buy the right to run ads yourself.” How are the CPMs going? 17 cents? “Higher than that,” Andreessen said. “We are just starting to get into this. There are more and more ad networks in all kinds of countries. Our approach is to slice and dice this.”

Regarding Bill Gates retiring from full-time work at Microsoft this summer, Andreessen said, “It’s hard to sum up his contribution to the industry.” Gates managed to shake up IBM’s hold on the industry. The mobile world, however, is structured much like the PC industry and that is holding the mobile industry back from explosive growth, Andreessen said.

The audience started asking questions. What can we do about the security holes in the browser? “I can’t do a damn thing about it,” he said. “You have to have a continuous cat and mouse game. Obviously open source helps keep a lot more eyes on the system.”

Andreessen said one of the best places to invent is in a research lab at a university. But it takes business know-how to make the transition to working in the tech industry.

And that’s a wrap.