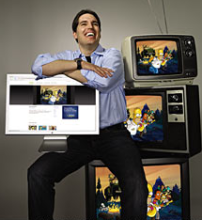 Kilar’s talk focused on what drives the Hulu team, what inspires the product they create and what they believe has contributed to the site’s astounding success and results. It reinforced the ongoing trend that a lot of advertisers are gravitating towards this market, especially because they can better control their brand in terms of what types of content their ads will appear in.

Kilar also addressed the distribution markets competing for viewer eyeballs. Why focus on getting an individual to purchase Season 1 of Mad Men on DVD when episodes can be streamed directly from a computer? Money comes in from ad revenue, but a lot of that goes back to the content providers and partners. If you put too many advertisements in a video, users will be turned off. How do you strike a fine balance, so you can generate enough revenue from advertisements to cover the high cost of premium content? Will consumers sit through five or ten ads in a premium show for Hulu to afford streaming this content? There aren’t any easy answers, but Hulu’s success stems from how dedicated and obsessive its team is about delivering an experience that users want (one that pleases advertisers, too).

My frantically-typed notes from the keynote, below:

10:03 am: Jason Kilar says there are three keys to creating a transparent window into how Hulu operates: A big wave, obsessing and results.

The Big Wave: 12.6 billion video streams in the US according to comScore this September. If you look at this number a year ago, it was a fraction of 12.6 billion. “Something is afoot here…a lot of users are responding to premium content, both long-form and short-form. Hulu is able to innovate on behalf of users.”

Why is online such a growth category for the Internet? Kilar likens it to what Starbucks has done for coffee. More people around the world now drink premium coffee and hot chocolate. Why is that? Starbucks makes it easier to consume. People will consume more of it since it’s so accessible.

“Media is an impulse business…powerful things happen when you make it easier to consume.” That’s the heart and soul of Hulu, making it easier and fun for people to consume content.

10:05 am On Obsessing: Hulu’s mission: “Helping people find and enjoy the world’s premium content; when, where and how they want to.”

The company’s rallying cry: “To deliver a service that users, advertisers, and content owners unabashedly love.” It wants to be careful in making a service that everyone will love. The luxury at Hulu is that it got to start with a clean piece of paper and build a mission and culture together as a team. What defines Hulu? How is it structured?

Strategy: Hulu aspires to deliver “brain-spray awesome” quality. More on the source of that description later.

What inspires the Hulu team? For one thing, Disney. Kilar’s whole life changed when his family took a big trip to Disney World and exited the railway to see the spectacle of Main Street and Sleeping Beauty’s castle. The impression on him was one that’s almost universally shared. But what really impressed him about Disney was its spotlessness — you can’t find a single gum wrapper on the sidewalk. It’s that obsession with detail and quality that separates Disney World from every other theme park on the planet.

Kilar says he was so consumed by the whole story behind Disney that he went to work there after school during college. (What a coincidence! I, too, worked for Disney during college — for Disneyland, though, the original — and was the best Mickey Mouse-shaped pretzel and churro peddler ever.)

The Hulu team, dubbed “odd birds” by Kilar, obsesses over every pixel in the screen the way Disney street sweepers obsess over the tiny pieces of debris in the amusement park. The design over the site, the fonts, the whitespace — everything that informs the user experience is of utmost importance, as minute as it may seem.

10:11 am: Hulu is committed to giving users and advertisers choice. The aim is to listen to the audience and empower users. Hulu listens by giving users feedback features such as the “thumbs up” and “thumbs down” buttons on the lefthand side of ads.

Relentlessly innovate: The thumbnail you get when you search for a video, such as the Saturday Night Live short of Natalie Portman rapping, changes depending on the words you use to search. Searching with the term “Natalie Raps” will give you a result with Natalie’s face. Searching for “Andy Samberg” will bring up the exact moment he appears in the video with Natalie.

“Being neurotic is a very good thing for users,” says Kilar.

10:13 am: Listen. Take action (quickly). On Thursday, November 6, a small bug was spotted on Hulu at 12:34 am by a user. There was copy on the site that hadn’t been updated, announcing that the 2008 presidential election was approaching, even though it had already happened. Hulu’s response time was astoundingly quick. By 12:54 am, Eric Feng, CTO of Hulu, had replied to the user directly, thanking him for his quick catch, and had corrected the page.

A Hulu first-time user, Marisa Wegryzn, posted that “My first Hulu experience made my head explode in a brain-spray of awesome.” This is the kind of feedback Hulu is trying to elicit from users and advertisers, and the team incorporated her comment into its strategy.

On results: In September of this year, Hulu had 12 million monthly users and 145 million monthly video streams. PC World Magazine named it the #1 product of 2008, and TIME Magazine rated it among the top 5 inventions of 2008.

10:18 am: Hulu has been embedded 1,500,000 times on over 60,000 sites. Kilar stresses that the company remembers its humble roots, despite its success. Kilar says that if you compare these stats with media companies’ content streams before Hulu launched, Fox, for example, has been able to triple its overall online business since March 12.

Kilar says that Hulu wants to build a better mousetrap, by building an ad service that has higher recall rates. He is adamant that the company focus on the brand, because users notice this.

And now, for questions from the peanut gallery:

Q: What are you hearing from users about ads on Hulu? Would you prefer to have this ad, or that ad?

A: Ten times out of ten, people would take a free car over paying for a car. People know there’s give and take for access to incredible shows like SNL and 30Rock, and the price is being exposed to advertising. Feedback regarding the advertising experience runs along the lines of, “Hey, it’s great the ads are just 30 seconds.” People see the promise of having an experience that’s relevant to them.

Kilar admits they’re not there yet, but the more data you can collect about users, the more you can create products that are truly relevant and meaningful.

10:23 am: In answering a question about Hulu’s international plans, Kilar wants people to be able to watch content from anywhere, but can’t release more plans about globalization or a roadmap for where the team wants to go. He stresses that the way they make decisions is, they look at a hundred potentially good ideas, but funnel down to the top three ideas that they can implement now, because they’re still a startup constrained by limited resources.

[Photo by Robyn Twomey for Fortune]