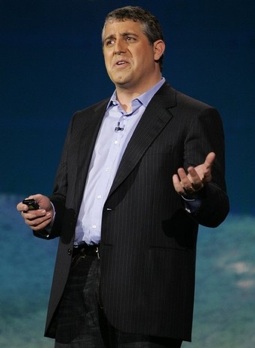 GigaOm’s Om Malik interviewed Sling Media’s co-founder and chief executive Blake Krikorian on stage at the NewTeeVee Live event today in San Francisco. It’s clear that Krikorian is very bullish on the prospects of using the web to bring content into the living room. Obviously, Sling has had a lot of early success in using the web to move content with its Slingbox device.

But Krikorian thinks the move to the living room is more of a “glacial process” rather than a rapid move. The problem, as he sees it, is that there are business model challenges — the content is there, but how do you monetize it?

When Malik brought up Apple and Google as two companies who have had success on the Internet (Google) and with digital media (Apple), Krikorian said that taking over the living room will be hard for them because it’s still the cable and satellite providers domain to lose. But he notes that they could lose it because they are “asleep at the wheel.”

When Malik asked about Steve Jobs’ comment made earlier in the year that its Apple TV device (which puts content from the web onto televisions) was more of a “hobby.” Krikorian joked that it was funny how when the device first came out it was hailed as the next big thing, and Apple didn’t play that down, but then when sales cooled, it became a “hobby.”

In terms of what Sling Media is working on for the future, Krikorian noted Sling’s new video destination site, which is currently in closed beta testing, but will launch later this month. In terms of how it compares to competitors already out there like Hulu and the newly web-based Joost, Krikorian calls Sling’s offering “really the world’s first multi-source, multi-platform site.” By that he means that it will work on various devices beyond just a computer-based web browser.

Krikorian also said that early next year a lot of the dynamic tools found on the web-based Sling site will be available in the television experience of the Slingbox as well.

Below find my live notes (most are paraphrased):

Om Malik: Where video is going, how our living rooms are going to change? The big shift is happening in the living room – starting next year will it take off?

Blake Krikorian: We always seem to be saying next year is the big year… – it’s more of a glacial process. The building blocks are all there. There are business model challenges, that’ll hold the market back a bit. But is online video there? Absolutely. It’s a question of how do you make that access be ubiquitous? Also, right now consumers stare into an abyss of choice.

OM: Are you going to make TV more web-like?

BK: Absolutely, things have to meld together. It’s not like you’re going to have a browser on the TV, but instead it’s the experience and the tools we take for granted on the web are going to come over to the television. They will unlock a tremendous amount of value.

OM: Google and Apple do what they do really well. Are they going to move into the living room?

BK: It’s hard for them to move into the living room because it’s the cable and satellites business to lose, but they could lose it because they’re asleep at the wheel. They’re too busy thinking about “I have more HD channels that anyone else.”

OM: What are you guys doing at Sling?

BK: We’re finally getting ready to launch phase 2 of the company. We had a 10 year vision of where we wanted to go, but you can’t really boil the ocean. We want to connect consumers to content regardless of where it is. Let’s get the content on places you couldn’t get it before.

Early next year some of the web tools will be placed into the television experience.

OM: So television does television really well, but let’s use the interactive parts to complement it?

BK: What user interface revolution has there been (since TV has been around)? Basically nothing. It takes software, that’s part of the challenge.

OM: The next big thing in the living room: First, TiVo, then Sling, now “Me TV”? IP Televison? A computer-like device?

BK: Yeah, basically. There will be a taking of the clip culture of YouTube, and applying it to TV.

OM: Why are you so bullish on this home stuff, when people like Steve Jobs says Apple TV is just a “hobby?”