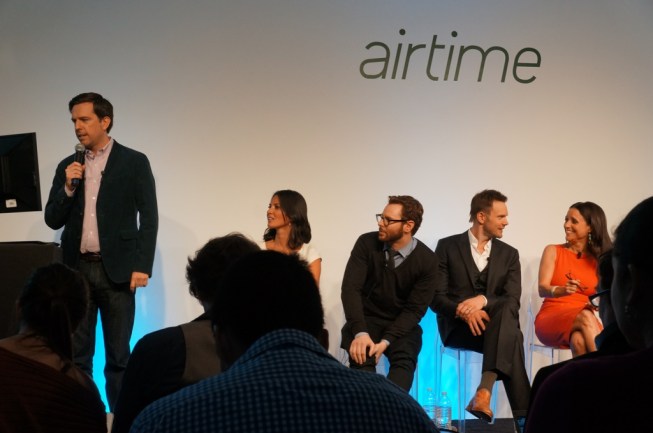 Think of it as a less-icky Chatroulette with a $33 million wind at its back. And today, we finally got to see it in action.

Parker calls Airtime the “best and fastest way to video chat with your friends on any platform.” It’s web-based, so you don’t have to download a separate applications; frictionless, since you can get started immediately without much setup; and perhaps most importantly, it relies on Facebook’s social graph, so it’s connected to identities people are already using online.

Late night star Jimmy Fallon first hit the stage to introduce Parker and Fanning, calling them the “Jean-Claude Van Damme and Dolph Lundgren of the Internet.” (If you don’t get that reference, watch some 80’s action movies, kids.) Parker told the tale of how they first met online in a chat room and bonded over their interest in hacking and computers.

“We understood the potential,” Fanning said when Fallon asked if they realized how important Napster was at the beginning. But he went on to say that the pair were mostly just having fun by developing the music sharing service.

What the heck is Airtime?

“We’re actually building a network service,” Parker said as he began a presentation explaining Airtime. “This is different from a consumer hardware product or a consumer software product… We’re actually opening up to the world and beginning the process of constructing that network.”

Parker went on to say that despite the massive rise in social media popularity, he can’t help but feel we’ve taken a step back. Many online services have us spending more time processing information than interacting with information, he said.

With rise of both broadband and webcams, Parker says now is the perfect time to pursue true social video chat.

He railed against social games from companies like Zynga that aren’t exactly real-time, but are instead all about taking turns. “There’s all kinds of things people could be doing if there was a platform for synchronous interactions,” Parker said. This seems to be the crux of what Airtime is all about. 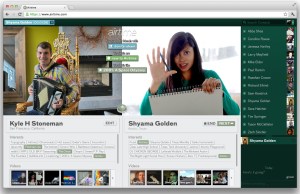 Security is a big part of Airtime’s core principles (Parker listed it four times on his slide for emphasis). The service avoids the problems of Chatroulette (inappropriate behavior, indecent exposure) since it’s tied to your Facebook identity. If you’re a bad actor, Airtime can easily kick you off the service. The company also has people monitoring the service for bad behavior.

As for utility, Parker stresses that Airtime is all about making new friends.

“Facebook isn’t helping you make new connections, Facebook doesn’t build new relationships,” he said. “Facebook is just trying to be the most accurate model of your real life social graph.”

When your demo fails, call the celebrities

To demonstrate how Airtime works, Parker called actress Olivia Munn using the service. The call connected quickly, but it may have helped that she was just sitting backstage. Airtime’s interface is fairly simple: your video video is on the left side, the person you’re calling is in the center, and your list of friends is on the right. When the call first connected, Airtime displayed a few related interests (which slowly faded away) and then Parker seamlessly shared a few web videos with her.

Munn came on stage and tried to surprise the audience by calling rapper Snoop Dogg. Her first few tries failed (I think because she was trying to call a Facebook user pretending to be Snoop Dogg), but eventually Snoop himself called. Munn showed off her Snoop impressions, the crowd politely laughed, and we moved on.

Munn then called comedian and actor Joel McHale, who ended up coming onstage instead of chatting over Airtime. Unfortunately, his appearance set off a string of technical errors that halted the demo for several minutes. 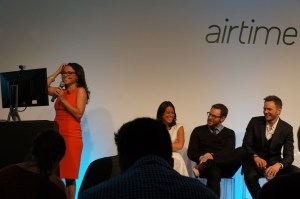 “Sean Parker is literally a genius and I love it that he has to pull wires out of the back of the computer to make it work,” McHale quipped as several event staff members tried to get the demo going again. Once things started working, he called actress Julia Louis-Dreyfus, who then came on stage to ring up fellow actor and comedian Ed Helms. (We get it Sean Parker, you have many very important friends.)

Helms called singer Alicia Keys over Airtime, and they were able to successfully chat for several minutes. (Unlike most of the other celebrities, she wasn’t hiding behind the stage.) Helms then tried to call Parker’s Airtime offices, but unfortunately nobody picked up. Eventually, a disheveled Jim Carrey wearing a gas mask successfully called Helms.

“So where do I click to download music… to destroy the music industry,” Carrey quipped while chatting with Parker.

Throughout all of the demos, there were occasional connection and network issues. It’s hard to blame Airtime for all of the trouble, since relying on venue Wi-Fi for demos is often a disaster.

Parker capped off the demo with an obligatory video featuring a catchy indie song, which shows the potential for Airtime much better than the on-stage demos.

In the end, it was probably a good thing Parker had a bunch of comedic geniuses to help distract from the buggy demos.

“I can’t actually thank you guys enough,” Parker said to his celebrity crew, the Huffington Post reported, “because you took a completely fucked-up situation where everything was going to shit and actually salvaged it.”

Despite the trouble with the service today, it’s clear to me that Airtime has a lot of potential. Perhaps it’s because there’s a big idea driving Airtime: Technology is here to help us, not to flood us with information. Airtime is the logical evolution of social media technology — it’s something that actually brings us closer together, even with complete strangers thousands of miles away.