The social Web offers a huge flood of opinions and content on everything under the sun, and Livefyre‘s mission in life has been to harness all that expression for publishers and brands.

As a next step in that goal, the San Francisco-based company is announcing today the release of a new, real-time version of its content marketing and engagement platform called Livefyre Studio.

Used by such well-known names as AOL, CBS, and Universal Music Group, Livefyre searches for and collects content based on automated rules and then displays them in an app or site as Comments, Reviews, Live Blog, Chat, or other kinds of communities.

The biggest difference between this new product and previous ones, CEO and founder Jordan Kretchmer told VentureBeat, is that the new release has “the ability to design real-time apps and entire pages of content right from the new dashboard.”

Previously, he said, “customers had to write code and tie our apps together manually, which required an engineer.

“Studio makes it so that anyone can customize, then deploy, apps to their audience without typing a single line of code.” 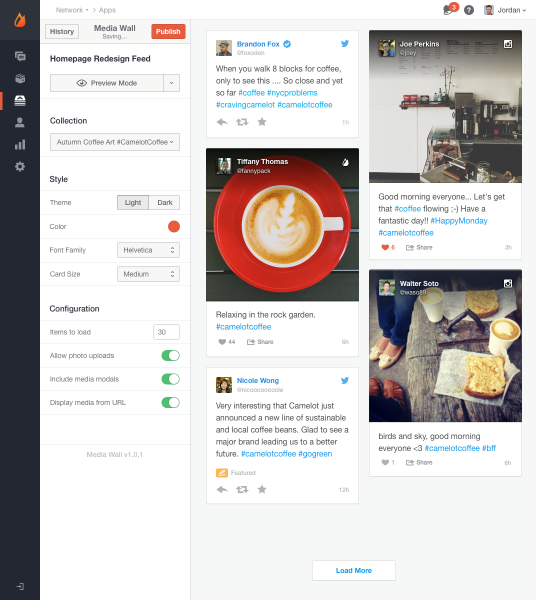 Above: A screen from the new Livefyre Studio

He pointed to Sony PlayStation as using Studio to manage “thousands of pieces of user-generated content produced every hour about their games.” This includes contests and “content modules” consisting of tweets, blog posts, and YouTube video.

Dell, he said, has used Studio for its live event social media streaming at Dell World a few weeks ago, which included curated social feeds.

In addition to the creation of real-time apps and entire pages, the new Studio’s enhancements include rights and content management in a single workspace, upgraded analytics, and a unified login to all Livefyre environments.

One criticism from publishers has been that the platform often gathers comments with little value to a site or app, such as a message from one friend pinging another about a news item.

Kretchmer told us that Studio addresses this issue, with more than 20 new automated filters and rule parameters that can, for example, turn off replies and mentions. This means, he said, “a significant increase in the amount of valuable content, and a significant reduction in the amount of irrelevant content.”

As for competitors, Kretchmer said it consists of point solution providers, like Disqus for comments, Spredfast for curation, and ScribbleLive for live blogs.

“Those are three out of over 40 pieces of functionality that we offer as part of Livefyre Studio,” he said.

[Disclosure: VentureBeat leverages many of Livefyre’s products, including its commenting platform.]