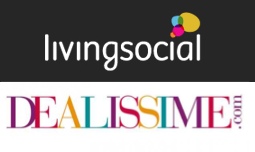 LivingSocial, the nation’s No. 2 deals site, has acquired a French daily deal company Dealissime.com to help it catch up with market leader Groupon.

The size of the deal wasn’t disclosed, but we’ve heard it’s small, focused primarily on acquiring talent in an important market. But it’s just the latest effort, including a string of acquisitions, by LivingSocial to catch Groupon at a time when Groupon itself is surging ahead at a frenetic pace. Also scary for LivingSocial is the recent entrance by massive players like Facebook and Google into the group-buying market.

Here’s the good news: LivingSocial appears to have gained ground in the U.S. market, hitting about 50 percent of Groupon’s market share of late, up from just 4 percent in Jan., 2010, according to Jeremy Liew, a board member and venture-backer with Lightspeed Venture Partners. It’s brand is widely recognized now by most U.S consumers, even if they often don’t understand the difference between it and its competitors. LivingSocial has closed the gap with aggressive marketing, heads-down execution, as well as forging a few tactical differences: One focus, for example, is on “hyper local” deals. LivingSocial might offer you any deal in San Mateo, Calif., if you live in San Mateo. By contrast, Groupon focuses more on personalization, and is thus more likely to offer you sushi in San Francisco if it knows that you like Sushi, even if you live 40 minutes away in San Mateo.

But here’s the bad news: Even as LivingSocial has spent much of the last year trying to catch Groupon in the U.S. market, Groupon has expanded aggressively abroad and so is still the undisputed market leader. And so while LivingSocial is purportedly worth $2.9 billion, more than what Groupon was worth last year, Groupon is now worth between $15 and $25 billion, according to the latest private valuations it has negotiated (though it’s true that those discussions center on Groupon’s pre-IPO value; Groupon was valued at $5.7bn at its most recent private financing in January).

Hence the latest string of acquisitions by LivingSocial in places like Australia and Spain. The Spanish company it acquired, Let’s Bonus, also operates in Italy, Portual and parts of South America. Groupon’s strongest European market is France, notes AllThingsD, but the Dealissime purchase there won’t be enough to overtake Groupon. In May, Groupon had five million members in France, and generated a reported $35 million. Groupon acquired Germany’s Citydeal to enter Europe last year.

“We are chasing them, no question,” Liew says. He adds that there’s 80 percent similarity between the models of LivingSocial and Groupon and 20 percent difference, and that the difference is mainly tactical. Another tactical difference is LivingSocial’s rollout of verticals, including offerings like “travel” and “family.”

LivingSocial, based in Washington, DC, also today announced its acquisition of Socialmedia.com, a social networking marketing company, a deal that was previously reported. That too was a small acquisition, and done mainly to hire talent for its marketing efforts, until recently run largely by LivingSocial’s CMO.