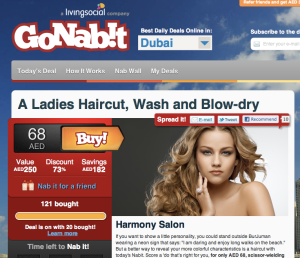 GoNabit, based in Dubai and operating in the United Arab Emirates, Kuwait, Egypt, Lebanon and Jordan, has an Arab-language interface that helps reach regional shoppers who have eluded LivingSocial rival Groupon. The relationship is symbiotic: While GoNabit helps LivingSocial tap the lucrative Middle Eastern market, LivingSocial will help GoNabit develop a more functional payment processing system.

Ranked number two in daily deals in the United States, LivingSocial appears to be on an international spending spree. While LivingSocial hasn’t made formal announcements on the deals, DailySocial reports today the company has also acquired Thailand’s deal site Ensogo, which is the parent company of DealKeren in Indonesia (which offers daily deals in Thailand and the Philippines).

Meanwhile, in the United States, details on the news that Vienna, VA-based Grotech Ventures sold “some” shares of LivingSocial are coming to light today after a weekend’s worth of speculation. Grotech was the earliest investor in LivingSocial (which is based in Washington, DC), leading the company’s $5 million first round in July 2008.

Reports indicate Grotech raised around $200 million by selling shares to undisclosed third-party buyers. While peHUB first reported the sale on Friday, the exact number of shares had not been released. According to Fortune today, the sale involved “just a minority” of Grotech’s LivingSocial holdings.

We called Grotech for comment and they aren’t talking.