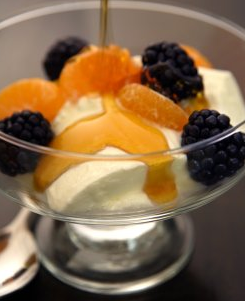 Amid a flurry of (disputed) reports and rumors about Apple chief executive Steve Jobs’ “rapidly declining health,” blogger Robert Scoble did some field work to dig for the truth today.

Well okay, he was in a yogurt shop with his friend, Socialtext cofounder Ross Mayfield, when Mayfield mentioned he had seen Jobs there in the past. So Scoble decided to ask the person working behind the counter if they’d seen Jobs recently. And guess what? They had.

“I’m in Palo Alto. Just had yogurt at shop that Steve Jobs eats at frequently. They said he was in a couple of days ago and is in great health,” Scoble posted on the social aggregation service FriendFeed. Apparently, the yogurt store in question, Fraiche Yogurt, delivers yogurt to Apple executives every week, Scoble wrote in a comment. A separate blog, Swanktastic, confirms that Jobs (and other big names in tech) have been seen at the shop in recent months.

While a yogurt store employee may not seem like the best source in the world, look at the sources attached to the other stories about Jobs’ health — in quite a few cases there are none and it’s all speculation. Or, in today’s case, it’s an unnamed source who’s been right in predicting Apple product announcements in the past. At least CNBC’s Jim Goldman claims to have sources inside Apple telling him the rumors of Jobs being sick aren’t true, but for a lot of people that isn’t enough, considering Apple has been misleading to some extent in the past.

So give me the first-hand account from the yogurt store employee who’s seen Jobs with their own two eyes recently. It’s better than blind speculation.