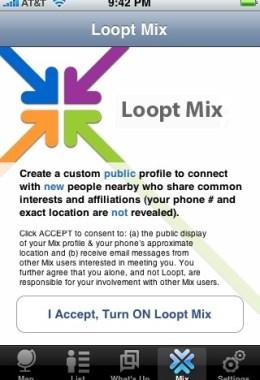 Version 1.1 of the location-based social networking application Loopt has just gone live in Apple’s App Store. This update carries with it a big new feature: Loopt Mix. This feature solves perhaps the biggest problem facing many of the location-based networks: You can’t find anyone else using them.

While Loopt Mix may or may not make your actual friends join Loopt, it will show you others around you who are using the service and have opted-in to share their location as well. The opt-in part is important because obviously some people will not appreciate complete strangers knowing where they are at times.

To use Loopt Mix you simply start Loopt and click on the Mix icon at the bottom of the screen. This displays a page that will show you all other users around you based on proximity. Clicking on a name will bring up a profile that can show you more information about them such as gender (if it isn’t obvious from their icon) and what they’re looking for — as in networking, dating, friendship, men/women, etc. You also have the option to send the person a message.

Creepy? Maybe a bit, but also potentially interesting and powerful. The problem with location-based networks right now is that there’s a stalker stigma attached to them somewhat. That may or may not go away, but it seems fairly likely that it will as other larger networks such as Facebook and MySpace add location data to their networks as well.

Think about the potential of walking into a conference where you’re not sure who you know. You can start up Loopt and instantly find out who is there with you. Same thing with a coffee shop. Or maybe you walk into a bar, maybe you’re lonely, maybe someone else is. I’m just saying…

I’ve actually been using Loopt Mix for a while. Loopt was installing it manually on people’s phones at TechCrunch’s August Capital event several weeks ago. Even with only a handful of people using it, it was kind of cool to see it in action. I could, for example, often see when Loopt chief executive Sam Altman was around me.

Loopt Mix also features the ability to tag yourself with various interests, and has communities which you can join to further customize groups of people you want to meet. 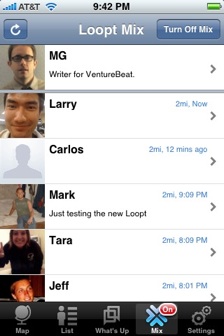 For example, two of the early communities are Rock the Vote and imeem, so fans of either can join those communities and find other fans nearby using Loopt Mix.

You can also do searches for types of people you are looking for based on tags, age range, gender and what they’re looking for.

Disabling Loopt Mix in those times where you don’t want to be found is as easy as one tap of a button on the screen. You can also obviously set what attributes you want to share with the public. Since Apple doesn’t allow applications to run in the background, Loopt Mix will only work for now when you have the application open. That’s a problem — one that I hope Apple will step up and fix.

I just downloaded the update and started using it again — there are already at least a dozen people I can see around me. Again, somewhat creepy due to the stigma, but kind of cool.

I firmly believe that location will play an important role in many of the mobile-based applications of the future. Loopt Mix is an important step towards getting people used to the idea of using something that on the face of it may seem invasive, but has a great upside as well.