Loopt, the cellphone service that lets you track your friends on a map and communicate with them, said it is now also available on RIM’s BlackBerry Curve, Pearl and World devices.

This makes Loopt the third location-based service (LBS) to be available on the majority of U.S. smartphones, but arguably lets it open a lead over competitors Whrrl and Brightkite in this segment. I’ve illustrated the competitive field with one of my napkin drawings below. You’ll see that Loopt has an extra green box at the top because of its coup at Apple’s WWDC last week, when it was featured as part of Steve Jobs’ keynote. Loopt beat out Whrrl, we reported last week.

I’d appreciate feedback from the LBS companies, in case I’ve misunderstood the availability of their apps.

The illustration omits the added advantage Loopt enjoys by having struck deals with the major U.S carriers. It has signed with Sprint and Verizon, and while it hasn’t announced AT&T yet, we’re expecting it to — due to the fact it was featured so prominently during the 3G iPhone announcement last week (the iPhone’s US carrier is AT&T).

With the Blackberry, Loopt announces a number of other carriers:

Loopt.. announced today that the location-based service is now available for free to BlackBerry users on the Sprint, Alltel, T-Mobile and AT&T networks. BlackBerry users can now share their location information with friends across multiple devices and carrier networks.

Some perspective: The U.S. smartphone market saw sales of 7.3 million units in the first quarter, a global record of 106 percent annual growth, according to research company Gartner. Another research company, IDC, estimates RIM’s market share at 44.5 percent, Apple’s at 19.2 percent. The Pearl, Curve and World are believed to be the most popular Blackberry phones.

Note that Loopt was already available on Motorola, Samsung, LG and Sanyo feature phones prior to this announcement, which we group together under “Others” in the diagram. Whrrl offers a simplified SMS version of its service for other phones. Brightkite offers a “generic” mobile application, which we’ve heard mixed feedback about from experts. 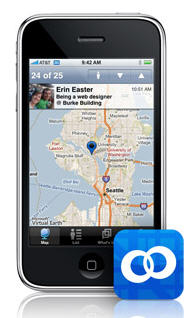 The pending release of the 3G iPhone has spurred speculation about pending wild growth of smartphone sales and application development. Based on the Apple keynote announcement that the iPhone would have GPS technology, many foresee a bright future for location-based services. That’s because LBS applications make up the largest share of mobile applications total sales.

However, there seems some controversy in this, based on the experience with LBS so far.

Venturebeat guest author Jason Devitt published a piece Saturday describing his nine years in the LBS industry. In the piece he describes in depth the challenges LBS has been facing over that time, including Loopt’s challenges, but he also nods to the opportunity the 3G iPhone now represents.

His view can be seen as moderate, mind you. One of the world’s top mobile consultants, Tomi Ahonen, questions the viability of LBS, calling it “singularly the biggest failure of our industry” and much more. His considerable experience makes an impressive anti-LBS case.

Still, as Devitt points out in this comments to Tomi Ahonen’s article, there’s counter-evidence suggesting LBS’s success too (for example mobile application sales).

Ahonen uses thinly veiled references to criticize Devitt’s piece, or at least so it seems (coming a day after Devitt’s piece was published), referring refers to “semi-credible experts on LBS,” and “current statements coming from the West Coast of America.” However, like Devitt, I believe LBS is about to succeed on current generation smartphones.