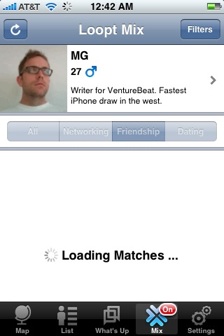 Apple clearly has high hopes for the location-based social network Loopt. It has shown off Loopt’s iPhone application at conferences, featured it on its displays and even made it central in one of the new iPhone commercials. But Loopt hasn’t yet reached its potential on the device. Everyone is still trying to figure out the best way to do location-based networking. It’s a work-in-progress, and updates to Loopt’s app show that.

Tonight, the company rolled out version 1.2 of its iPhone app. While the update contains the usual bug fixes and performance tweaks, the real meat of the update is in Loopt’s potentially powerful Mix feature. The look and feel of this area has been completely revamped.

Because it is so potentially powerful, Loopt Mix is also more than a bit intimidating. You see, it lets you view and be viewed by random strangers who happen to be around you (assuming they too are not only using Loopt but have opted in to Loopt Mix as well). Previously, it was hard to tell exactly who was around you. When I’ve shown it off before, more than a few times people would question, “Is that a guy or a girl?” because of the small picture icons. Not only are those now bigger, but there is now a male or female symbol next to Mix profiles to show you exactly who you’re looking at.

Or maybe, more appropriately, who or what you’re looking for. New filters on Mix’s main screen make it easy to find people who are specifically looking for “Networking,” “Friendship” or “Dating.” While the first two are areas that anyone on Mix can see, the dating area is only viewable to those users who also say they are interested in dating.

If you are in fact interested in dating, you also now have to specify which gender you are looking for. Again, this makes things a bit more clear. Quite a few users have reported getting unsolicited messages from other Loopt users of the same sex when they weren’t interested.

Of course, no matter what tweaks and improvements Loopt makes to its service, nothing will really matter for location-based networks on the iPhone until Apple finally releases its Push Notification system and/or allows applications to run in the background. Loopt packs a lot of potential punch, but right now, it basically requires that everyone have it running at all times. On the iPhone, that is unreasonable. And it will never truly take off like that.

Find Loopt in the App Store here. It is a free app.