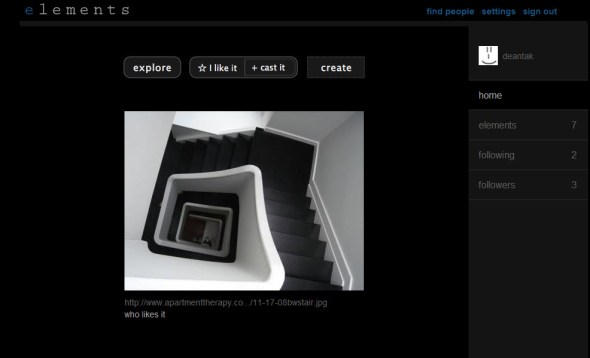 The downstream influence of social messaging service Twitter, which lets you message friends or hangers-on about what you’re doing or thinking at any given moment, is beginning to result in some interesting applications. One of those, Lunarr’s Elements, is kind of a visual Twitter, allowing users to share what they’re looking at with others.

With Elements, users can make friends in a Twitter-like fashion and then share Elements — inspirational pictures — with them. The application is based on a Japanese saying, “ichi-go ichi-e,” which means “one chance, one meeting.” The idea is to use it to refresh your mind, if only for a few minutes a day. The pictures are uploaded by users themselves.

The interface is very simple. Against a black background, you can click on just four actions. If you hit Explore, the application will push someone else’s Element at you. You can hit “I Like It,” and it will push more of the same in your direction. You can hit “Cast It,” and it will broadcast that Element to your friends. Or you can hit the Create button, which lets you upload your own picture.

Even though users can upload any pictures they want, there is always a link back to the original web site, so there isn’t as much concern about pirating images. You can use the Elements tool to capture a quote, too.

There isn’t any obvious commercial business here yet. But Lunarr is a company that doesn’t mind taking risks like this. Hideshi Hamaguchi and Toru Takasuka co-founded the company. Both worked together at Panasonic. Takasuka left in 1997 to start Cybozu, which became a successful software company. Hamaguchi was running client strategy for a design lab, Ziba, for Panasonic in Portland, Ore., and did other functions for Panasonic after that. In 2005, they left to start Lunarr in Portland. The company now has 11 employees.

A year ago, it launched its first application, now dubbed Themes, which basically lets you write notes to people on the back of web pages. You flip a page around, write a note and then share it with people. It’s a cool kind of collaboration tool. To promote it, the company rented a billboard along Highway 101 in Silicon Valley and threw a big marketing budget into this single sign, with cryptic messages that encouraged people to flip over web pages. 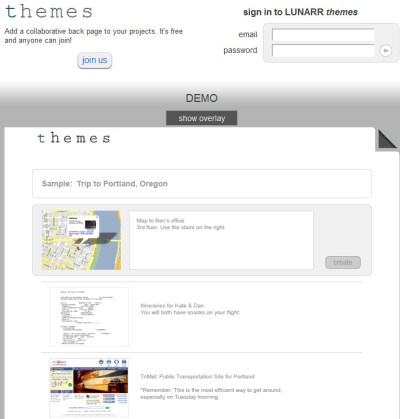 A year later, the campaign is about to wrap up. Hamaguchi said the sign marketing didn’t work as well as he’d hoped and that Themes hasn’t caught on. It has some 7,000 dedicated users but isn’t the widespread viral phenomenon the company had hoped for. It was a goofy idea, but one that came from a company that doesn’t mind doing things differently.

Elements is off to a good start. About nine out of ten people using it stay on the service for more than 20 minutes at a time. About 700 people had shared 10,000 Elements as of a couple of weeks ago. This month, Lunarr will kickstart some viral functions to help it spread, including making an appearance at the South by Southwest conference in Austin, Texas.

It’s not taking off like wildfire. But Hamaguchi said the company is OK with the slower pace of growth. That’s because it has a kind of trilogy of software applications in the works, all aimed at helping artists collaborate better. Elements serves as a kind of creative inspiration. Themes is a collaboration tool. Another application in the works will tie the two together, says Hamaguchi. He calls this “crystalizing.” It will be interesting to see what that application does.

Artists and designers are always looking for ideas and inspirations. Hamaguchi’s hope is that the recommendations of images that Elements pushes to users will inspire their own creativity. You can befriend me on Elements by finding deantak.