Remember Lycos? Of course you do. Remember when you last used the site? Of course you don’t. Perhaps that’s exactly why the company’s taking the site in a new direction: video on demand (VOD) rentals.

Started as a Carnegie Mellon University research project in 1994, Lycos was one of the first web search engines. By 1999 it was one of the most visited sites in the world, then Yahoo and Google happened. While it still maintains respectable traffic worldwide, Lycos, now owned by Daum Communications Corp. (the second largest portal in Korea), is more than an after-thought in the web 2.0 world.

In 2005 the company decided to shift its strategy away from search to online communities and broadband entertainment. That transition continues today with the launch of Lycos Cinema.

An online video on demand service, Lycos offers both free and premium content. The free content is ad-supported, while the premium content takes a new approach: fees based on the number of “seats” — that is, how many people you want to watch the film with.

That’s the key component Lycos Cinema feels will set itself apart from the competition: social interaction. When you load up a movie, a chat room appears on the left hand side. Here, you can invite and interact with friends about the content you’re all watching. It’s a cute idea — in theory at least. 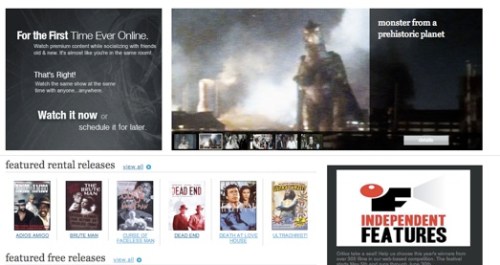 In reality there are problems. First, the content. To be frank, it’s awful. It’s not that I haven’t heard of all of the films (only most I hadn’t heard of…), it’s that there’s no way I would pay to watch most of them.

The second problem Lycos Cinema has is the competition it faces. In the growing field of VOD you have Apple’s iTunes movie rentals, Amazon’s Unbox rentals and Netflix’s Watch-It-Now, among others. All of them offer much better content at similar prices with a much better experience. Even the free stuff on Lycos can’t begin to compare with what the NBC and Fox-backed online video site Hulu offers.

The third problem, unfortunately, is that the site throws errors left and right. About half of the time most pages don’t load at all and instead spit out a code error. Even if I wanted to rent a movie, I might not be able to — it’s a total crap shoot.

If you are able to get to the featured rentals promo page, you’ll notice a top section that looks quite a bit like iTunes movie rentals’ CoverFlow view. It’s really kind of pathetic.

Lycos sold to Spain’s Terra Networks in 2000 for $5.4 billion. It was resold in 2004 to the aforementioned Daum Communications Corp. for $95.4 million. At that rate it’s due for another sale this year, priced to own.