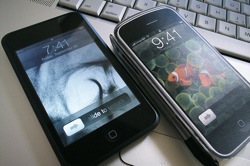 With the pricing and release details finally out for the iPhone 3G, we’re starting to get some answers about what will happen to first generation iPhones when users upgrade.

While AT&T would prefer that you hand off your old iPhone to a friend or family member who could then reactivate it (with one of its service plans), it’s acknowledging that you will still be able to use the device without cellular service. The Wi-Fi, iPod and other various non-AT&T network functionality will remain intact.

In other words, your iPhone will become an iPod Touch.

If you do wish to hand off your old iPhone, AT&T has a short tutorial [PDF] for the steps you should take to do so. It even, finally, acknowledges that you can take out the device’s SIM card — you just need a paperclip.

There’s also been quite a robust eBay market emerging for first-generation iPhones, seeing as they can easily be unlocked and used on other networks. Since you’ll have to activate your iPhone 3G in-store complete with a 2-year service agreement with AT&T, unlocking the new iPhone won’t be as straight-forward. At least not until the non-contract iPhones go on sale at a later date.

Another option for you first-generation iPhone owners may be to use it as a remote control for iTunes. Buried in the code of the pre-release version of iTunes 7.7 is wording indicating that a free app of this nature is coming shortly. If someone creates an app that lets the iPhone control your entire home entertainment center, I’m sold.