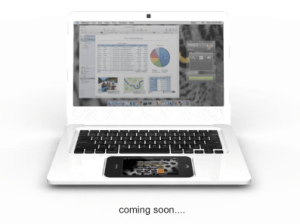 The iPhone can run a lot of applications. Some of them are simple, some, like several of the games, are complex. Whether you think of it as such or not, the iPhone is a computer. Soon, it can be made to look more like a traditional one.

A company named Olo Computer has a new product coming soon that is basically a netbook (a small laptop) with a built-in dock for the iPhone. The dock, which resides where a trackpad would be on a regular laptop, apparently allows you to run what is on your iPhone on the netbook’s larger screen. With its small camera above the screen, keyboard with small spaces in between the keys and pure white case Olo’s device even looks like a MacBook (at least until the new ones come out on Tuesday).

But the picture of the device on Olo’s site is deceiving. The image on the screen shows the computer running Apple’s OS X operating system — the real version, not the version that runs on the iPhone, as iTWire points out. So unless Olo is planning to install OS X on its systems (which Apple doesn’t allow), there is no way the netbook could pull information from the iPhone to run full OS X.

It’s not really clear what the Olo system will be able to pull from the iPhone. If it can completely recreate the iPhone user experience on a larger screen while you use the iPhone’s touchscreen itself to control everything, that would be pretty cool. But how would the system know to use the full-sized keyboard of the device rather than the iPhone’s keyboard if you’re using that to control other aspects on screen?

It would seem that Olo will have some kind of customized application for the iPhone to handle the transition to the netbook screen, but would Apple allow such an application in its App Store? Maybe, or maybe not. Apple has come under fire for rejecting some applications that compete with its own apps. Apple also might not like one that changes the way the iPhone is used.

If it works, such a device could be very useful — especially for heavy travelers. Or it could be another Palm Foleo — a similar device for Palm that was cancelled shortly after it was introduced in 2007.