Mark Zuckerberg took to the stage for a Townhall Q&A at the Indian Institute of Technology (IIT) in Delhi today, where he revealed a handful of new stats and fielded questions from the packed audience.

The visit represented part of a whistle-stop tour of Asia that also saw the Facebook chief give a speech at Tsinghua University in Beijing, China, where he took the opportunity not only to compliment and court key people, but also show off his improving Mandarin.

Though he did use his time on stage to reveal that Facebook was to start blocking all those unwanted Candy Crush Saga invites, the India visit was always going to be heavily focused on Internet.org, the company’s polarizing free-Internet program that was recently rebranded as Free Basics.

The first question Zuck faced was perhaps one that was on everyone’s lips, and it drew a raucous laugh: Why is Facebook showing so much interest in India?

For many, the answer to that question is obvious. In his opening gambit, Zuckerberg reminded everyone that there are 130 million Facebook users in India, from a population of 1.25 billion people. That’s a large pool of untapped ad-viewing eyeballs, and even if you discount the roughly one billion people in India who don’t yet have access to the Internet, that still leaves more than a hundred million people to target here and now.

But Facebook isn’t looking at those 100 million-plus people — it’s looking at the bigger picture. By 2017, it’s thought that there will be as many as 500 million people in India with some form of Internet access, thanks in part to the prevalence of cheap smartphones and 2G subscriptions. India represents one of Facebook’s biggest potential growth markets, one that could help drive its current monthly active user (MAU) count past the magic 2 billion mark.

But Facebook’s well-honed mantra of “connecting people” remains the official public line, and you can’t actually argue with that — it genuinely does want to connect the next billion people. Because they’re worth a lot of money. 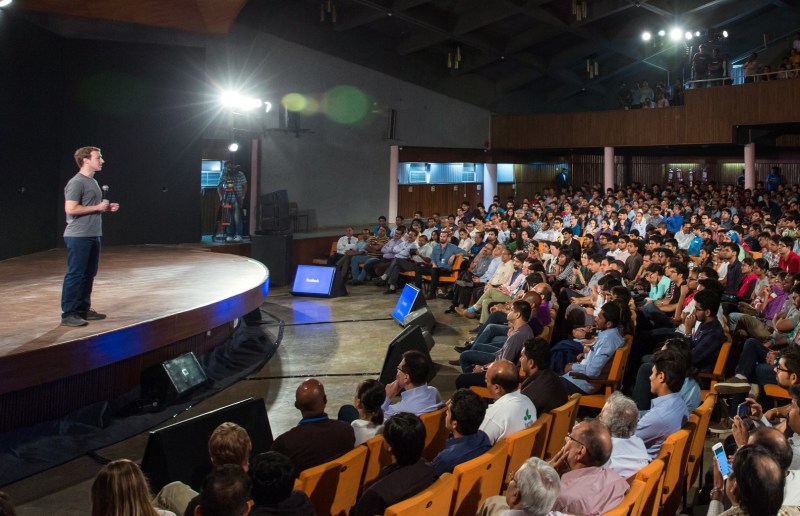 Above: Mark Zuckerberg in Delhi

This all felt like a prelude to discussing Internet.org, which Zuck revealed has now helped 15 million people get online around the world, one million of whom live in India. “There are 15 million people around the world who have access to the Internet now because of the efforts we’re taking with Internet.org who wouldn’t have had it otherwise,” he added. “I’ve seen some cynical reporting, saying that the program isn’t doing as well as we want, but if you don’t think that’s good, I want to know what you think is good.”

Much of the cynicism hasn’t really centered on whether Internet.org is doing as well as Facebook would like. The criticism has been more about how it selects the services that are offered for free through the app — Facebook itself features prominently as a so-called zero-rating service that attracts no data charges, as do some other local services. Protecting net neutrality has been the core concern, and this is why Facebook recently opened things up to let any developer include their services in Internet.org.

Ultimately, Facebook’s focus on India is all about the opportunity — if a billion people aren’t connected, well, they can’t use Facebook. But Zuckerberg looks beyond India itself and talked about how increasing connectivity across the country can affect the rest of the planet, too.

“It’s easy to talk about this as being something that’s important for India, but I actually think that connecting people in India is one of the most important things we can do for the whole world,” he said. “It’s not just improving the lives of people here, there’s all these ideas that entrepreneurs and students have that the rest of the world doesn’t have access to today. All the things that students and entrepreneurs could produce if they had access to these tools? Everyone around the world is currently robbed of that opportunity.”

So Facebook, according to its cofounder and CEO, is wooing India not purely to help Indians get online — he reckons that the whole world stands to benefit from getting another billion people online.