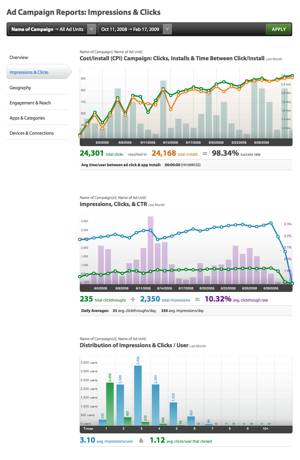 Medialets, a combination mobile analytics and advertising service for developers, has aimed to bypass larger competitors by focusing on the innovation happening on the iPhone and Android devices. The plan has been working so far — and it has won the confidence of venture capitalists with a $4 million first round of funding from Foundry Group, DFJ Gotham and angel investor Bobby Yazdani.

The New York company provides software to developers, so they can track how people use their applications and serve those people ads. It launched when Apple’s App Store launched last July, and has since found its way on to near half of all iPhones and iPods sold. Its analytics code has been downloaded more than 60 million times, and it has partnered with 1000 developers on the iPhone (and more than 200 for Android). It has worked with some large advertisers, including MTV, FedEx, Paramount and Dockers.

Mobile ad networks like Admob and larger competitors like Yahoo and Google have long been experimenting with mobile advertising, but not all of them have moved as quickly into the emerging iPhone market. Google, for example, only recently began testing ads that run within iPhone apps. Meanwhile, other mobile analytics companies have taken aim at the iPhone, including Pinch Media last July and Flurry this past October.

Medialets and other companies have also moved aggressively into Android when the mobile operating system went live on HTC’s G1 phone for T-Mobile last fall. Android is expected to spread across many more devices this year, but so far it has not amounted to nearly as big of an opportunity as the iPhone, as this guest column from Medialets showed as of last December. Public statistics published by Admob have consistently showed the iPhone dominating in smartphone usage, even though devices made by Nokia and other established phone manufacturers still comprise most of the world’s mobile phones. Android isn’t the only other platform that Medialets is looking at. It also plans to expand to other devices this year, including the Blackberry, the forthcoming Palm Pre, Windows Mobile and Symbian.