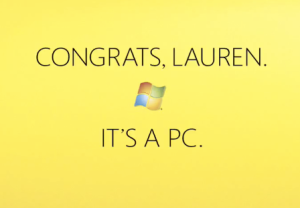 By now, you’ve probably seen Microsoft’s new “Not cool enough to be a Mac person” ad. (If not, I’ve embedded it below.) On the face of it, it looks like a decent ad. It plays on the one thing that will catch people’s attention in a down economy: price. But if you stop to think about it, the ad is kind of pointless, because it’s targeting people who were going to get a PC anyway.

You see, Lauren, the girl in the ad, wants a laptop with a 17-inch screen for under $1,000. Apple simply doesn’t make that product. And perhaps more importantly to the relevance of this ad, Apple has no intention of making such a product because it simply doesn’t care about competing in that end of the market. 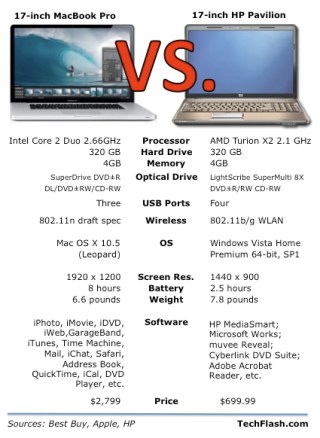 TechFlash was able to find out the computer Lauren did choose in the clip and compare it to a similar Apple system. As you can see in the chart (right), the systems aren’t all that different on paper, but the Apple machine costs $2,000 more. While it’s not a perfect translation, as the different components likely cost different amounts, it’s clear that Apple is making a lot more money for each unit sold.

But the chart isn’t able to point out one of the biggest selling points of the Mac in recent years: user experience. While the machine specs might be similar, one machine runs Windows Vista, while the other runs OS X. Apple, as it has made abundantly clear with its own “Mac vs. PC” ads, is more than happy to pit those two against one another any day.

And as the blog Last Podcast points out about Microsoft’s ad, “Isn’t it somewhat odd that Microsoft — which is in the OS business and not in the hardware business after all — doesn’t even mention the OS?”

Yes, that is odd. But it’s a sign that Microsoft doesn’t want to engage Apple in the user experience war it’s been waging and would rather pick its battles on the price front, where Apple won’t fight.

There’s always a lot of talk about how Apple “needs” to get into the cheap laptop or netbook business. Hell, I’ve even written about it a bit as well. With the economy the way it is, it’s hard not to think about. But the fact is, Apple is still doing just fine for itself by playing its own game.

If it wanted to seriously challenge Windows-based PCs as the dominant computer, it would release a wide range of computers at several cheap price points. But it has never been interested in that. And a misguided Microsoft ad will not change that.