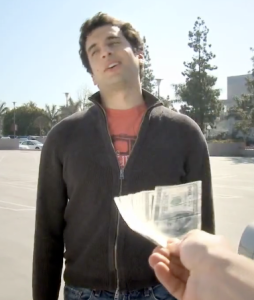 As expected, Microsoft released its second “Laptop Hunters” commercial today. But rather than the bubbly actress Lauren, this one features Giampaolo, a “technically savvy” shopper. Once again, the ad pits a PC versus Mac, with price being the key issue. Simply put, this ad is better but still odd.

I say it’s better because at least this time, the shopper isn’t looking for a computer that doesn’t exist. Last time around, Lauren went to the Apple Store looking for a 17-inch laptop for under $1,000 — something Apple doesn’t make. Giampaolo is given a bit more leeway, as he has $1,500 to spend. And he heads to a electronics super store that carries both PCs and Macs so he can compare them.

This time around, there are actually some Macs that exist in Giampaolo’s range — but only two of them (he wants a laptop). He could get either a 13-inch white MacBook (starting at $999) or a 13-inch aluminum MacBook (starting at $1,299). But it’s pretty apparent in the commercial that Giampaolo wants more options — he asks a lot of questions to the store clerks — and I think that’s a fair criticism of the Mac, because there are so few of them, not everyone is going to find exactly what they want.

But what’s odd once again about this commercial, is that Windows is never mentioned. It could have just been a fluke during the Lauren commercial — perhaps that part was on the cutting room floor — but now it’s apparent that Microsoft has no intention of touting its product in its commercials. Instead, this is like an HP advertisement, just as the Lauren commercial was.

While I think these commercials are effective in a poor economy, they really sidestep the major issue in the Mac vs. PC debate: The operating system. Apple offers fewer hardware options, but from a hardware perspective Mac and PCs are largely the same (or theoretically could be with the right mixture of components). It’s the OSes that really separate them.

So when Giampaolo says the Mac is “so sexy” but complains that Macs are more about aesthetics, that’s kind of a silly argument. It’s basically the argument that Microsoft chief executive Steve Ballmer made a few weeks ago when saying that Apple users pay a $500 premium for the Apple logo. I would argue that for a majority of users, if they pay more, it’s for OS X versus Windows. And that’s exactly the issue that Microsoft once again does not want to get into — whereas Apple’s commercials go right for that.

They never mention Windows or argue that the presence of Windows on a computer is a selling point. Instead, they treat the OS as being pretty much irrelevant to the buying decision. That’s how they can get away with suggesting that the price of Macs is all about wasteful cool factor: If you treat the OS as a boring commodity, you can neatly sidestep addressing how Windows Vista compares to OS X. Whether it’s easier to use or less so; whether it has more annoyances or fewer of them; whether security is a bigger issue or less of one; whether the bundled applications are better or worse. And so on. The questions, in other words, that most sharply define the differences between Windows PCs and Macs.

So, while I do believe these ads are pretty effective, I think they only work an argument for HPs over Macs, not Microsoft over Apple. Microsoft has little, if anything, to do with the price of the PCs its operating system exists on, so I find it odd that it touts that in its commercials. What if tomorrow HP decides it wants to have Apple-like margins and raises the price of its systems to be more expensive than Macs? (That, of course, isn’t likely to happen, but just go with me here.) These commercials would be absolutely meaningless, and Microsoft would have no control over that.