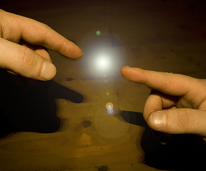 I was at the midnight launch of Windows 95 at my local CompUSA back in Ohio in 1995. That was the last time I was really excited about a Microsoft product.

Since then, I’ve become the proud owner of three Apple computers, four iPods and one iPhone. I’ve never thought about looking back to my PC days. Until today — maybe.

Today, at the All Things Digital conference in Carlsbad, CA, Microsoft showed off Mutli-touch capabilities bound for the next version of its Windows, smartly dubbed “Windows 7” (it’s the seventh iteration of the operating system). It’s slated to arrive in late 2009. This excites me — with an asterisk. I say that because it’s exciting if — and it’s a pretty big if — Microsoft is able to use the technology in a meaningful way. That is to say, not as a total gimmick.

While Multi-touch technology works great on the iPhone. On my new MacBook Pro, it’s more of a gimmick. I can pinch and rotate pictures — but I never do. It’s simply not all that useful. It’s cool to show off, not very cool to use. If I could, say, zoom in and out of Google Maps or Google Earth by pinching, that would be useful — especially if I could touch the actual screen to do it (rather than the small trackpad). Microsoft showed off something similar to that in the video embedded below.

Microsoft could have an opportunity here to restore some of its luster with those of us who have long since switched to “the other side”, as it were. The question is: Will Microsoft utilize it? I was initially intrigued when I heard rumor that Windows 7 would be built from the ground up: a completely new, lightweight operating system. Since then, it seems more likely that Window 7 will be “Vista 2” — or perhaps more appropriately: Vista as it should have been built the first time. This does not excite me in the least bit.

This new twist of Multi-touch does excite me again, but there are plenty in the Windows camp who think this is a bad idea for Microsoft. If Microsoft listens to these people, it is foolish.

There has been a perception problem surrounding Microsoft and specifically Windows for a long time now. It simply feels stale. It needs some hot new technology to lift it out of this funk. It needs Multi-touch. I was excited about Microsoft’s Surface computing almost exactly a year ago, I continue to be excited about the technology. In the time between then and now there hasn’t been much in terms of products from the company that have even raised my eyebrow.

Last week I read the article in Fast Company about Microsoft hiring the ad agency Crispin Porter + Bogusky to revamp its image. It gave me some hope about the future of the company. Today’s demonstration gave me a little bit more.