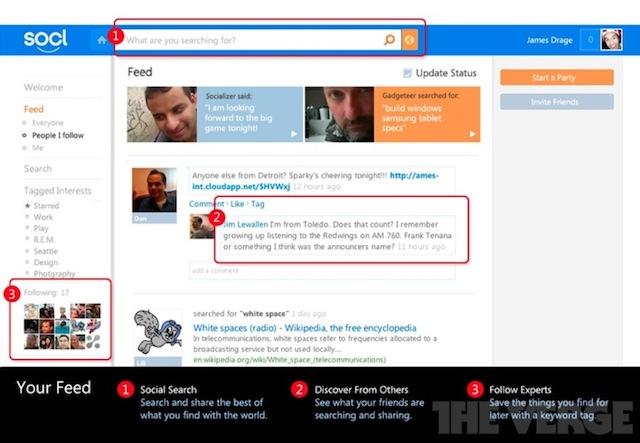 Microsoft is testing a new social service, called Socl.com, which looks like the company’s attempt at creating its own version Google+, reports The Verge.

VentureBeat first reported that Microsoft was working on a social network in July, when the company revealed the splash page a secret social project on Socl.com. The project, called Tulalip, had the slogan “find what you need and share what you know easier than ever”, and allowed users to signup using Facebook and/or Twitter. Although Microsoft denied the news, it seems that the company has continued its work on Socl.

Much like the original slogan, Socl mixes search, discovery and social, according to The Verge’s report. The design features a standard three-column layout, with basic navigation in the left, a news feed of activity in the middle and some rich media components on the far right. Everything is focused on the search bar. When you type in a search query, a list of Bing results pops up along with possibly related activity from your social networks. If you choose to post your search query as a status update (yes that’s right, search status updates), other users can comment on it. You also have the option of saving select terms (or tags) within each search query to view for later, which is very similar to Google+’s Sparks feature.

Another similarity to Google+ is Socl’s “Video Party” feature. Like Google Hangouts, a Video Party lets you watch a video with multiple friends at the same time and chat with them in real-time. It has support for YouTube videos and (presumably) other videos hosted by Microsoft. The site is built on HTML5, and doesn’t require the use of plugins like Microsoft’s Silverlight.

One big difference between Socl and other social networks is the lack of “listing” features. According to The Verge’s report, Socl doesn’t give users the ability to drop friends into groups based on work, personal life, locations, etc. the same way the Google Circle’s or Facebook’s Smart Lists do. That means all search status updates are shared with whoever you’re connected with on other social networks. The site also lacks the ability to tag individual users (e.g. +Tom Cheredar or @tched).

Right now, Microsoft hasn’t made an announcement about whether Socl will become available to more people for testing. We also don’t know if the company plans to launch the service to the public in the future. However, if it does get a public launch it’ll have quite a bit of catching up to do against Twitter, Facebook and Google+.

[Screenshot via The Verge]