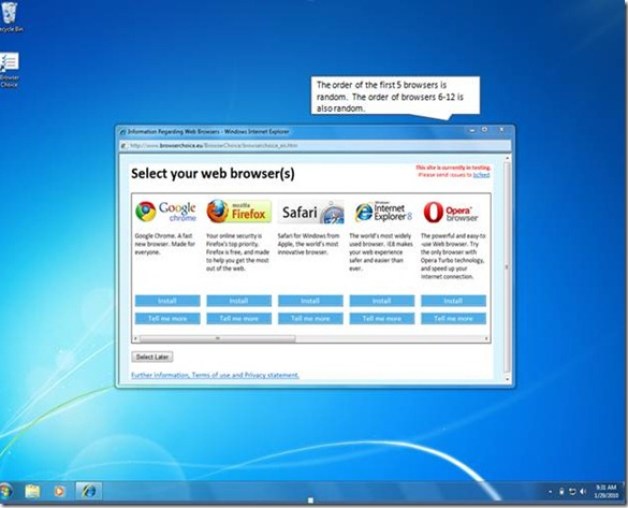 In December, Microsoft and the European Commission finally arrived at a resolution regarding charges of anti-competitive behavior with Internet Explorer. Microsoft agreed to implement a “browser choice” screen that would pop up for Windows (XP, Vista, and 7) users in Europe, and would make them aware of alternative browser options like Mozilla Firefox and Google Chrome.

Today we finally have a glimpse at the choice screen from Microsoft, as well as an explanation of how it will be distributed.

Starting the week of March 1, Microsoft will begin rolling out the screen to Windows users across Europe who are using Internet Explorer as their primary web browser. The screen will present a randomized list of alternative browsers, along with links to install and learn more about them. Windows users in the UK, Belgium, and France will be able to manually download the choice screen from Windows Update starting next week if they wish to test it (I don’t suspect many will).

The European Commission’s decision followed antitrust charges by Opera against Microsoft from late 2007. Opera originally wanted Internet Explorer to be stripped from Windows entirely, but Microsoft later proposed the browser choice screen as a compromise.

While I’m not one to defend Internet Explorer, or Microsoft’s tactics, I never could stand behind the logic decrying Internet Explorer’s monopoly. IE’s dominance is a symptom of Windows’ dominance as a computing platform. You could definitely find examples of anti-competitive behavior from Microsoft, but that hasn’t really stopped Firefox from stealing marketshare from IE over the past few years.

Even if the browser choice screen doesn’t push Windows users to alternative browsers in significant amounts, it will at least give Microsoft’s European critics one less thing to complain about.