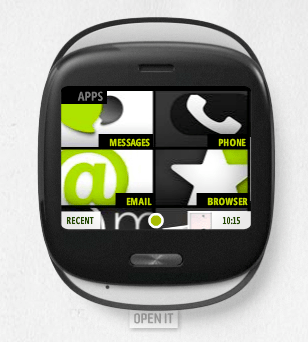 Microsoft finally unveiled its mobile strategy to entice consumers in their teens and twenties. It’s coming out with two phones — the Kin One and Kin Two — that deeply integrate social networking features.

The launch is an attempt by Microsoft to bring back the glory days of Danger’s Sidekick device, which was incredibly popular among young people. Microsoft purchased Danger Research in 2008, and since then there’s been little public success from that union; it wasn’t difficult to imagine that they were working on something covertly.

Robbie Bach, president of the entertainment and devices division at Microsoft, said the audience he’s aiming at desire a “multi-screen life” and want “a deeply social phone” that will amplify their lives.

Verizon will be the exclusive wireless partner for the new Kin phones in the U.S., and the device will roll out to its stores in May. Vodafone will carry the phones in Germany, Italy, Spain and the United Kingdom this fall. Microsoft is positioning the Kin phones as complementary to Windows Phone 7.

The Kin One (pictured right) has a compact keyboard for one-handed texting. Users can drag and drop photos and pieces of content across the screen to share them with friends on social networks like Facebook. Photos are automatically geotagged. It has a 5.0 megapixel camera with flash and shoots SD video. The small phone also has four gigabytes of disk space, which is enough to store 1,000 songs. Those, of course, are played through Zune. The Kin Two (pictured below) has a larger keyboard meant for two-handed texting. It has an 8.0 megapixel camera with 8 gigabytes of disk space.

The company is pairing the devices with online services called Kin Loop and Kin Studio (pictured below) that help users keep track of their friends’ lives and manage their own videos and photos. 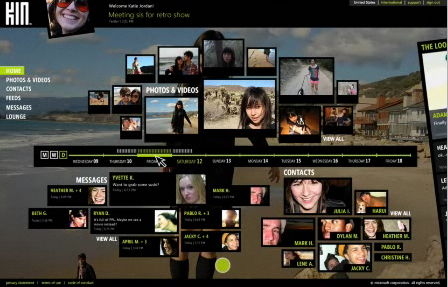 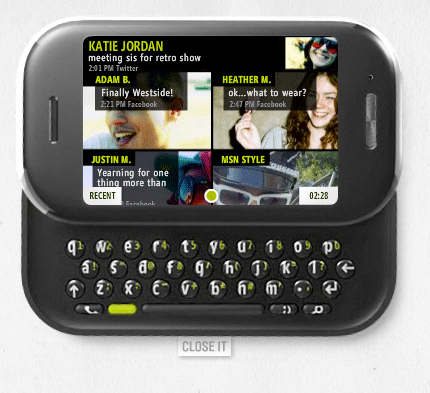