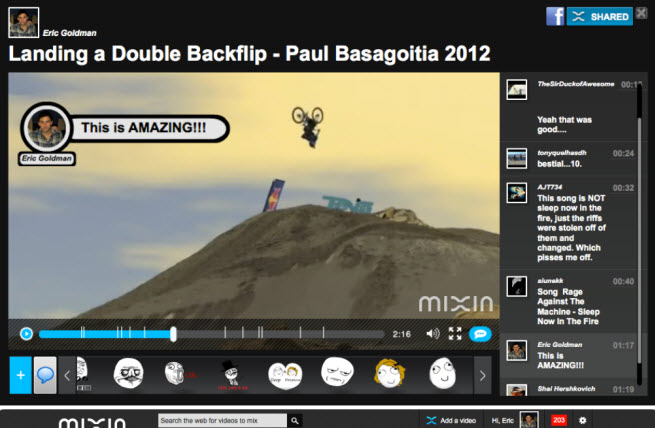 Mixin, a social video startup, is coming out of stealth mode today with a personal video sharing technology and more than 200,000 users.

The Santa Monica, Calif.-based company allows users to mix their personal comments into online videos and then share the customized results with their friends on their social graph, such as Facebook users. The company has gathered users quietly for more than a month and is publicly unveiling its partnership offering for other web sites today.

The technology was developed in Jerusalem, Israel. It allows people to start customizing and sharing videos within minutes on either a partner site or on mixin.com. You can add comments or a number of icons. The sharing is compatible with Facebook’s privacy settings so that users’ comments are only seen by their intended audience.

The first users of the technology include AnyClip and Viumbe. They will integrate the technology into their own video players. AnyClip allows users to access clips from over 12,000 feature films from studios including Warner Bros., Universal Studios, Vivendi Entertainment, First Look and Virgil Films. Viumbe provides 35 million video streams to 20 million users a month via properties such as eBaum’s World, Celebremix, and Your Daily Media.

“Most online video is all about searching and algorithms with some minor social features tacked on,” said Jon Goldman, chief executive of Mixin. “Mixin’s technology starts with social interaction as the foundation so that videos serve as a way to connect friends and increase sharing. The customization, commenting and posting to Facebook allows users to add their personal stamp and humor to the videos they love.”

He added, “Now we are able to add this functionality to partners which means any content owner looking to add to video engagement and sharing can use our ‘next generation’ commenting as a solution.”

Mixin users can choose to watch only videos created by their friends or select from the broader Mixin community.

“Once a user sees how much more fun Mixin can make something like Gotye’s ‘Somebody that I Used to Know’ music video, they are hooked,” says Goldman.  “With our white label offering, old school scrolling-style commenting is on its way to becoming a thing of the past.

Mixin is part of Qlipso, which has funding from Jerusalem Venture Partners. Qlipso was founded in 2009 to create social videos, and Mixin was established four months ago. The division has 14 employees. Goldman is the former chairman and chief executive of video game publisher Foundation 9 Entertainment. Rivals include Chill, Frequency, Socialcam, and Viddy. Goldman said that Mixin tries to be more consumer-friendly with easier authoring capability. 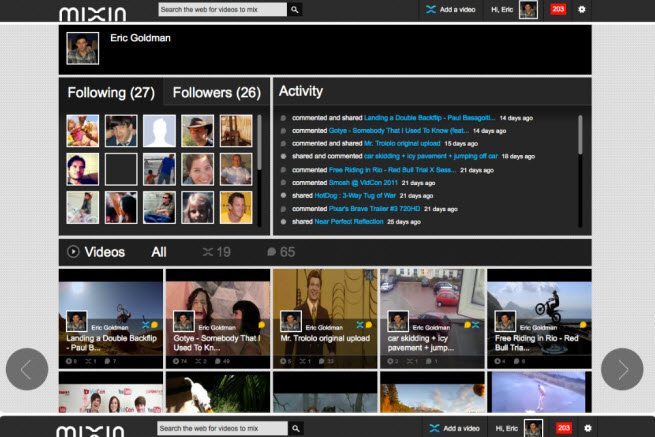