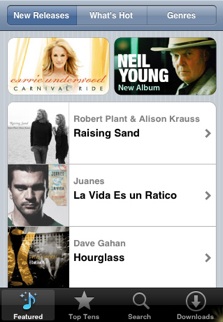 As Apple chief executive Steve Jobs likes to remind everyone, the iPhone is still an iPod — in fact, the best one Apple has ever made. With this in mind, Apple is apparently pushing to make music a central part of its upcoming 3G iPhone release.

Apple is in discussions with the major music labels about expanding music services on the device, according to The New York Times. The hope is that some new agreement can be in place for a launch in June. As many of us know by now, the 3G iPhone is expected to launch in June.

A key part of these discussions is said to be ringtones — Apple wants more of them available. Also being talked about are the so-called “ringback tones” which play a song of your choice on another person’s cellphone when you call them.

The big component of the deal however may be Apple’s desire to sell the entire iTunes music library on the mobile version of iTunes that runs on the iPhone. While current iPhone owners are able to access the store when they are on a Wi-Fi connection, with the addition of the mobile broadband 3G technology in the next iteration of the device, it should make it so people can buy music anytime, anywhere.

Something like that could certainly make for a nice slogan when Jobs takes the stage in June.

Ringtones are, in my opinion, one of the greatest rip-offs in the history of mobile devices — right up there with text messages. Who on Earth would pay $0.99 for a 20-second ringtone when you can buy the same full song for the same price? Believe me, I know it’s a huge business, I just can’t for the life of me understand why.

I sincerely hope Apple isn’t planning on making ringtones a key part of its strategy. If Apple and the music labels were smart they would team up to make it so that ringtones were included with all iTunes purchases made on the iPhone. That could really spark some sales from the device.

Naturally, for all of these things the record labels are thought to want a larger cut from Apple. New agreements could also be used as leverage to get Apple to allow for variable pricing for music tracks on the regular iTunes store. Apple has shied away from doing this in the past, but recently allowed certain HBO television shows to be sold for a dollar more than the until-then standard of $1.99.

Also supposedly still being discussed is the idea of a subscription-based iTunes music service. Universal Music Group is said to be pushing for this. Something which I’m still not sure is a good idea — for Apple at least.

As has been very clear, Apple does not cave in very easily. Many of the labels are still apparently holding back on giving iTunes the same DRM-free music that they give to other services such as AmazonMP3 — another move seen as a negotiating tactic. But rather than give the labels the upper-hand, Apple has sat back and let promises go unfulfilled.