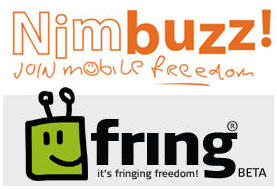 Nimbuzz, the mobile VoIP and IM startup based in the Netherlands that offers you the kitchen sink of services — all for free, except for data charges, of course — has raised $15 million more in a second round of financing led by Naspers/MIH.

VentureBeat covered Nimbuzz’s impressive VoIP shotgun offering (including its social networking widgets, etc.) last month. However, there are so many competitors in this VoIP area (130 startups, according to one count) and such small margins, it’s very difficult to see how a company can make it big. Nimbuzz also appears to be doing too much. Indeed, its client software is about a 1 megabyte download, as Techcrunch UK points out.

Our internal panel decided not to make Nimbuzz or Fring nominees for MobileBeat’s best mobile companies. As we said at the time, we hope they can prove us wrong and become a big hit regardless. Nimbuzz’ Tobias Kemper said the company is focused this year almost exclusively on growth but plans to make money eventually via white-label services, advertising and deals with carriers and social networking companies.

Nimbuzz is certainly doing a lot, and swinging for the fences. They told Techcrunch UK they have a million registered mobile users so far — as recently as May, CMO Tariq Dag Khan mentioned that they had only half that number. The company hopes to get to 5 million users by the end of the year and has been helped with significant funding. It’s already taken $10 million from Mangrove Capital Partners. Mangrove, an early Skype investor, also participated in the latest round.

Nimbuzz first launched Java and Symbian versions to support 500 handsets in 50 countries. The latest cash will be used to extend to Windows Mobile, iPhone and Android.

However, it’s worth noting that players like Fring have already released an iPhone version (that works with jailbroken iPhones).

Fring released a taste of the first add-ons built via its APIs, which include features such as social networking (interacting on Facebook and Orkut), video and email notification features. Screenshots and YouTube clip below. 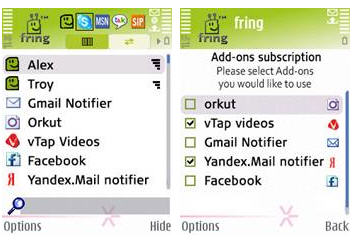