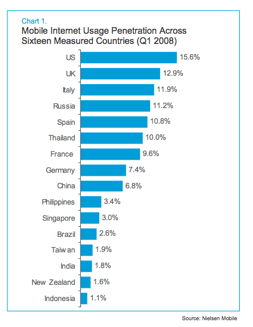 It’s been known for a while that iPhone users in the U.S. love the mobile Internet, but that love is spreading to the rest of the population rather quickly, according to a new study by Nielsen Mobile.

Of the countries surveyed, the United States was first in mobile Internet penetration with 15.6 percent of all mobile users accessing the web from their devices in May. The UK was second with 12.9 percent followed by Italy at 11.9 precent.

The report notes that advertising has reached a critical mass in the U.S. with its over 40 million active mobile Internet users. Considering that China and India, the world’s two most populous countries, still have low mobile Internet penetration numbers at 6.8 and 1.8 percent respectively, the opportunities worldwide should only grow.

It’s interesting to note that this study did not include several countries including Korea and Japan, where mobile web usage is likely very high as well.

While the iPhone gets most of the buzz in the United States for usage of the mobile web, it’s actually Motorla’s RAZR which is by far the top device used to access the Internet. The RAZR’s 10 percent share of web browsing in the United States easily trumps the iPhone, which comes in at number two with 4 percent. Data like that bodes well for services such as Mippin, which attempts to make browsing the web easier from mobile devices perhaps not best-suited to do so.

Of course, the iPhone has only been out for one year and has sold far fewer units than the much cheaper RAZR. When the iPhone 3G is launched on Friday, look for the iPhone percentage to increase.

Another interesting tidbit from the report is that Yahoo Mail beat out Google Search as the top mobile web channel in the U.S. — and by a large margin. Overall however, portals were more popular than web-based email.

More data can be found in the report itself [PDF]. 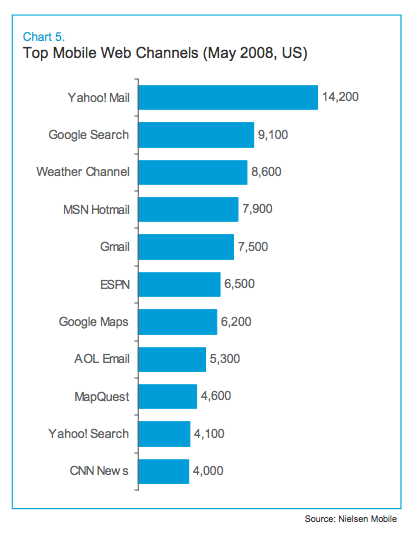