Social still sucks compared to search, Apple users do, in fact, buy more. And the real browser war is not Chrome versus Internet Explorer, but Chrome versus Safari.

Those are just a few of the conclusions of e-commerce optimization giant Monetate’s state-of-the-online-sales-union report for the second quarter of 2012.

Browser wars: not what you’d think 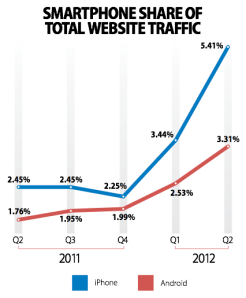 “The most interesting part for me is the browser war,” says Monetate’s chief marketing officer, Kurt Heinemann. “What we’re seeing on the e-commerce side of the fence is that mobile and desktop Safari are actually equal to Explorer.”

In fact, from 8PM to 11PM EST, when all portions of the country are out of the office, Safari accounts for 30 percent of traffic. That’s the desktop and mobile versions combined together, Heinemann adds. And it’s the browser traffic at e-commerce sites of Monetate customers such as Best Buy, QVC, Comcast, National Geographic, and many more.

In the wake of the Great Orbitz Pricing Non-scandal of 2012, in which Orbitz was found to be recommending higher-priced hotels to Mac users than to PC users, the hot question has been: do Mac users actually spend more?

“Apple users do have a higher order value. I think that’s a demographic thing — Macs tend to be a little higher priced than PCs.”

In fact, Mac users spend an average of $102.83 versus $88.75 for PC users, and just $84.91 for the cheapskate Linux faithful. On the other hand, the difference basically disappears in the smartphone world: iPhone and Android are almost neck-and-neck at $97 and change, with Windows Phone a little lower at $92.45. 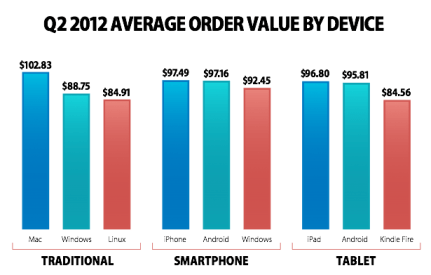 It’s in the tablet world that the order value differences reappear, but in this case it’s the Kindle Fire that loses out. Average orders on the Kindle Fire lag behind those on iPad or other Android tablets by about $10.

Social vs. search: social still sucks (but so does search) 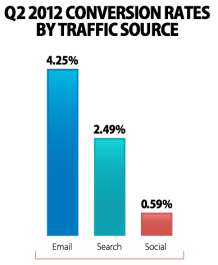 It’s fairly well known that social traffic to e-commerce sites converts at a lower rate than search traffic. Monetate confirms that: social converts at a measly .59 percent rate, while search is about four times better at 2.59 percent.

The real story which is sometimes somewhat obscured in the debate?

Email kills them both, converting at 4.25 percent … almost double search, and eight times better than social.

“That’s the great nugget there,” according to Heinemann. “In the whole social hype cycle people can easily take their eyes off the numbers, the conversion rates and average order values.”

Heinemann warns against putting too many eggs in the social basket, saying that email converts massively, and retailers need to do smart things to build their email database, and then use it well.

One caveat: there’s significantly more traffic from social than there is from email … so even with a lower conversion rate, social can still provide a significant amount of value.