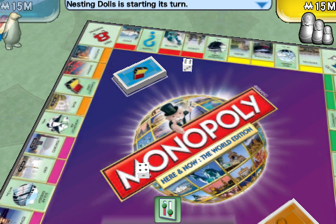 I’m going to assume that everyone reading this post was once a child. And with that assumption, I will make another one: That you’ve played the board game Monopoly at some point in your life. If that’s the case, you probably have fond memories of it. So I’m pleased to report that those memories translate well to the new iPhone version of the game.

Technically called MONOPOLY Here & Now: The World Edition (worst title ever?), the classic Hasbro game has made it to the iPhone and iPod touch via Electronic Arts. While the fundamentals remain the same — the board, the character pieces, the properties — the game uses the device’s touch screen and accelerometer capabilities to add to the experience. For example, you shake the iPhone to throw the dice. It’s subtle, but it’s nicer than previous video game ports that only required button mashing.

There are other neat features as well. You can listen to your own music while playing the game, you can get in-game recaps of the last five moves, you can see the entire board (and the world “levels”) in 3D, and you may even learn some facts about exotic destinations from the “Did You Know?” Chance cards.

And, as previous players of Monopoly will know, it can take a long time to finish a game. So it’s good to be able to pause and save a game at any point and come back later to keep playing. 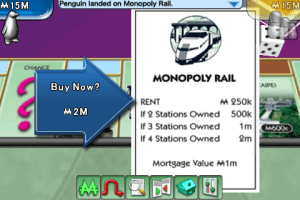 There is also a multi-player element to the iPhone version of Monopoly. While the “pass and play” method is fairly lame (you simply pass the iPhone around your friends to take turns), the Wi-Fi multiplayer mode allows you to play up to four other people on the same wireless router.

I got an early look at the game a few weeks ago when I sat down with some of the EA team responsible for the app. At the time, while it was a lot of fun, it was clear that there were some kinks in gameplay and overall lag to be worked out. So I’m happy to say that after playing the completed version tonight, those issues have been resolved. Given how much is going on in the game, it feels downright snappy.

And the price is even lower than I thought it would be. EA said that most of the games they were showing off a few weeks ago would be $9.99, but Monopoly is in the App Store for only $7.99 — a small price to pay for a piece of your childhood in your pocket.