There is a lot of talk today on the topic of no one caring about the short-form message service, Twitter, outside of a select group of insider tech people. Actually, this conversation has been going on for the better part of a year now. Some use it to argue why Twitter will not stick around long term, some use it as backup for why a high multi-million valuation of the company is ridiculous, other just use it to try and quiet those of us who incessantly talk about and use Twitter.

Kara Swisher of All Things Digital kicked off the latest round of discussions (which I lovingly refer to as a “Bitchmeme“, a play-on-words on the tech news aggregator, Techmeme, where such conversations explode), by talking about a recent trip to a wedding — where no one knew about Twitter. This is significant, she concludes, because it was outside of the tech sphere, and thus is probably a more true indication about how the whole rest of the world views Twitter. Swisher made sure to note that these people were at least somewhat tech savvy and knew about other hot Internet properties, such as Facebook.

Many of us who are within the tech sphere probably have similar stories. (I actually brought up this exact point on Friday as point three of my post on Twitter’s value.) But such stories downplay a few key elements in the larger picture.

First, Twitter is still a very young service. As Mathew Ingram points out, Facebook (again, one of Swisher’s examples of a known service) was not always so well known. In fact, hardly anyone outside of college campuses knew about it until arguably last year. Ingram also gives the example of online instant messaging. Something which Dan Farber of CNET mentions as well as a parallel for the future of Twitter.

To expect a service to go from zero to mainstream in a year’s time is unrealistic. That does not mean that it won’t. Which leads to point two.

Second, in the past few weeks, and especially since news broke about the American student tweeting (the term for a Twitter message) his arrest in Egypt, I have seen a flurry of people I know from outside the tech world sign up for Twitter. This may not prove to be the de-facto watershed moment for Twitter coming into the mainstream, but all that press from the likes of CNN and others certainly did not hurt. This, added to stories about Twitter helping out people in earthquakes and fires, is simply the best kind of press out there.

Third, even within the tech world itself I’ve seen Twitter “haters” turn into “players” in a matter of months. I won’t name names, but there are several folks out there who had absolutely nothing nice to say about Twitter when they first heard about it and saw it in action. Every single one of those people have now changed their minds and use the service regularly.

I say this to highlight that there was even dissension within the tech world in the beginning — and that really wasn’t all that long ago. Much of the talk from them was the same as some of the comments and questions we now get from friends and readers outside the industry. “I don’t get it.” “Why would I ever use this?” You get the picture — you might even think it!

It’s not so much a “don’t knock it til you try it” type deal. Twitter is different than that. Twitter, by itself, is not useful — at all. It’s your friends and followers who make it useful. You can sign up for Twitter, use it for months, and still find it useless. You need to find people to follow. I first spelled this out over a year ago.

3rd party developers are also taking advantage of Twitter APIs (application programming interface), and putting the data to different uses, which could make it useful in different ways to other people. Twistori (which I found today via Scott Beale of Laughing Squid, who was coincidentally named a “Twitter King” by Forbes today for his Twitter-led coverage of the Olympic Torch protests), is a social experiment/art project that pulls in tweets using the words “love”, “hate”, “think”, “believe”, “feel” and “wish”. This is perhaps less useful that it is interesting, but there are others out there utilizing Twitter data to track political discussion, such as Politweets.

There are already dozens, if not hundreds, of examples of interesting 3rd party apps being built on top of Twitter, and more pop up everyday. That is why it is important that Twitter gets its scaling and downtime issues in check. It’s not just the users who are relying on the service, other businesses and services are being built on top of it.

The bottom line is that Twitter might make it in the mainstream — or it might not. It’s simply too early to tell and judge the service on by that standard already. There are certainly signs of a breakthrough, but I happen to agree with folks who think that it may ultimately fly in the mainstream thanks to its mobile usage, as mobile computing continues to grow.

It’s purely hypothetical, but what if a company like Google were to buy Twitter and make it a central part of the Android platform? Or, I don’t think it’s far-fetched to think that a Twitter app will be one of the first must-have native apps built off of the iPhone SDK (software development kit). Just imagine if every iPhone had a Twitter button on the main screen? Do you think people still wouldn’t use it then? Check out Twitter in about 12-18 months for the answer.

Until then you can find me on Twitter here along with fellow VentureBeat writers Eric Eldon, Dean Takahashi, Anthony Ha and Chris Morrison. Oh, and we have a VentureBeat account (for our posts) as well. 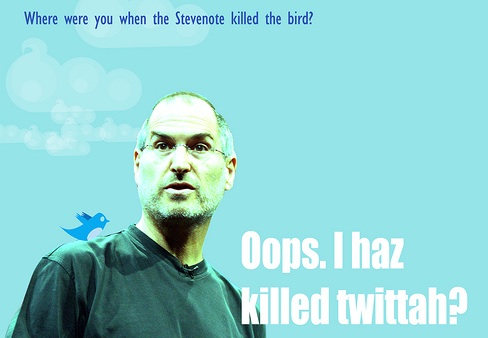