A large number of the cool new online music companies are struggling, but there’s one that isn’t bleeding red ink, and it may even start making money: iLike. 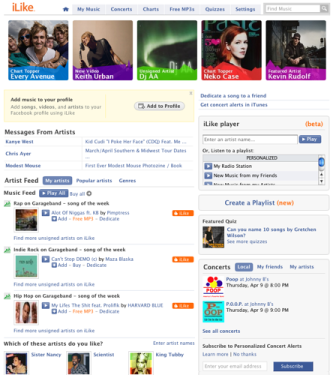 One music startup SeeqPod has just filed for bankruptcy, Imeem is trying to stave off expensive licensing fees, and Project Playlist still faces long-running copyright suits. But despite the doom and gloom among music startups, iLike has been “cash-flow positive” since December, Chief executive Ali Partovi says. The company’s last quarter was the company’s best ever, he adds.

There’s evidence that it’s doing well because it helps musicians find more fans and sell music. It does this through its applications on social networks like Facebook, its desktop plugin for iTunes and Windows Media Player, and its own ilike.com web site.

Revenue is coming through a combination of music-related ads, digital downloads through iPhones and Amazon and concert ticket sales. Its Music application on Facebook has 6.7 million monthly active users. It includes a section for seeing where nearby concerts are, including a list of friends who are going and a way to buy tickets.

iLike offers a range of services for musicians (and their labels), including features that let them update concert tour schedules, stream songs, and buy ads that appear in places like the music-focused news feed on its Facebook app. Major acts that have paid for extra promotion, including John Legend and Beyonce, have seen their albums hit number one on iTunes.

There’s a caveat to what I’m hearing, though. Being cash-flow positive doesn’t necessarily mean iLike is actually “profitable.” The company might be accounting for certain expenses in ways that mean more cash now but not so much profit after all the bills have been paid in full. Still, it is likely at least around break-even. But it’s a startup, so the goal is presumably to continue growing to get the traction where it can make more money down the line — rather than trying to make as much profit as possible now by cutting costs.

And that’s the thing: iLike’s costs aren’t as high as they are for other music startups because the company offers snippets of copyrighted tracks. It doesn’t have to pay for licenses to the full songs. If users want full tracks, they can pay iLike parter Rhapsody and stream music through its service into iLike’s applications. Of course, relatively low costs would also mean that the company doesn’t need to make too much money in order to at least break even (it’s not revealing specific numbers). Still, breaking even in the music business is hard these days, and suggests iLike will be around for awhile. 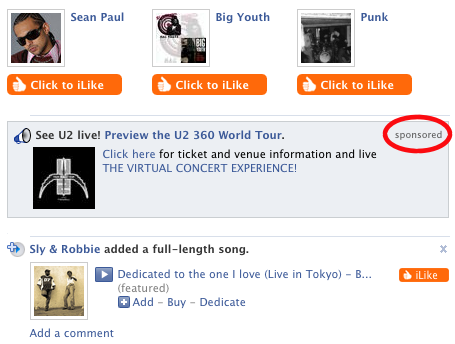 How can iLike claim that its service uniquely helps musicians? iLike measures pageviews and clicks that lead to purchases, and is “driving major traffic” for artists, Partovi tells me. He says that every album the company has promoted has made a top ten list on iTunes, and most have been in the top three. I asked him how he knew it was iLike itself that was driving this traffic and not the quality of the musicians that were using iLike. After all, social media web sites purposefully seek out celebrities to give users a reason to try out their services, as others have noted.

For example, country star Keith Urban’s Defying Gravity and soft rocker Gavid Degraw’s Free came in at number one and number two on the iTunes top album last week, after debuting on iLike alone two weeks before the albums went on sale elsewhere.

Partovi’s says that new artists more clearly show iLike’s influence, as they don’t have built-in fan bases that will help drive sales. Lady Antebellum, for example, debuted its first album on iLike a year ago, made it to #3 on iTunes and went on to win a Grammy. Electronic act Thievery Corporation — a long-time underground favorite — also made the Top 10 list with iLike’s help. In Lady Antebellum’s case, digital sales accounted for more than 21 percent of total sales in its first week, much higher than the 4.5 percent that the average country music album gets online. Although the band used its own web site and other online promotion as well, co-lead singer Charles Kelley said this at the time: “iLike made it easy and fun for us to communicate with our fans online anytime,” it “is a critical part of our digital presence and it clearly moved the needle on sales.”

So while we don’t know how much iLike is making, it has at least found a niche doing the three things it needs to do in order to survive: help musicians, make money in the process, and avoid trouble with the labels.