Muxtape, the popular virtual mix tape music sharing service, was taken down today due to a “problem with the RIAA,” reads a note on their site. That “problem” likely has something to do with the storage and usage of copyrighted music. Those of us who have been fans of the service for months knew this was coming eventually, it was just a question of when the service would get popular enough for the Recording Industry Association of America to care.

Now it is, and now the RIAA does. (Though Muxtape claims no artists or labels have complained, someone clearly had a problem with the site over at the RIAA.)

But the RIAA is essentially putting gum over cracks in the Hoover Dam. This is not going to end. And in fact it’s only going to get worse until it one day explodes.

The situation surrounding the online music discovery site Pandora is arguably even worse.

Company founder Tim Westergren recently said that Pandora may go under due to fees imposed on it by a federal panel last year. This high fee is only imposed on web radio, terrestrial radio has no such fee.

A deal is trying to be worked out to save Pandora, but it’s not looking good. “We’re approaching a pull-the-plug kind of decision,” Westergren told The Washington Post.

Considering that Pandora and Muxtape are two of my favorite sites on the Internet, I’m obviously annoyed. But more, I’m perplexed. Both of these sites are absolutely brilliant for discovering and enjoying music — shouldn’t the labels and artists be embracing them? Figuring out how to make it work, rather than shutting taking them down?

At least one of the two sides is going to have to start compromising.

The RIAA is suing music fans, suing sites, suing web services. This enrages many fans. The fans in turn are taking music for free even as more paid options arise. This enrages the RIAA and the labels and many artists. Neither side thinks they’re wrong and everyone is pissed off. It’s just an awful situation.

Last year, Mike Arrington of TechCrunch argued that music is on the inevitable march towards being free. He had some good thoughts: That recorded music should basically be a loss-leader for live concerts and merchandise which make artists a ton of money anyway (at least big ones) — things that can’t be pirated. And some bad ones: That the government should create a music tax. (He thought it was a bad idea previously, but came to feel it was one of the few ways the industry could actually be saved.)

A few months later, Ethan Kaplan, the vice president of technology at Warner Brothers Records, wrote a post extolling the merits of music as an art form and wondered if the government shouldn’t pay for it through programs (which apparently is done in some places in Europe) or grants (which apparently Canada does). 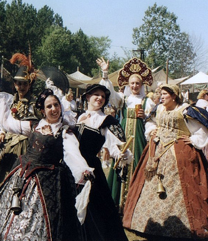 The idea of grants sounds interesting, but governmental programs seem too bureaucratic for art. That got me thinking, why not just kick it old school — as in Renaissance old school and explore the idea of patronage once again? That is, why not have individuals or groups of people pay for artists to make music?

The idea of “democratic patronage” was laid out in an article early last year, by Mitch Ratcliffe of ZDNet. He was writing about the digital music sales startup Songslide, but that method still involves paying for music that has already been made.

What I think may be a better idea is if people who really wanted an artist to make a new record commissioned the artist to do so. Those who could afford it and were excited enough about the music would basically be paying for everyone else to get it. It would be released free of cost, free of DRM, all of that good stuff.

The idea would be to spread the music as much and as quickly as possible to earn the band more fame and fans.

It could work on both a large and small scale. Maybe a bands’ friends or relatives would commission the first record. If the music was good and enough people liked it, maybe the next time around that band or artist would make even more money because demand would be higher and their fan-base expanded. This would be an incentive to make good music, something which Arrington took exception to in Kaplan’s piece.

I know it sounds a bit insane, but doesn’t part of it make sense on some level?

Of course, a lot of people would be against such an idea, namely the record labels. It would after all say to them: We don’t need you. But do we really need them in a time of digital distribution? Radiohead didn’t for its In Rainbows album. That is the beauty of the Internet. (Though the band later released a traditional version of the album anyway.)

Yes, it’s a pipe dream and will never happen, but who has a better idea? Let’s hear em. I’ll need something to listen to with Muxtape out of commission and Pandora heading the way of the Dodo.