MySpace has joined forces with the Wall Street Journal for “MySpace Journal,” a competition to send one lucky MySpace user to the World Economic Forum in Davos, Switzerland. The winner will be a “special correspondent” on behalf of the entire MySpace community and get to join the Davos press corps. If this sounds familiar, it’s because YouTube has a Davos contest too.

The World Economic Forum is an annual meeting of political and business leaders, intellectuals and journalists to discuss pressing global issues like the environment and poverty — this year is aptly themed “Shaping the Post-Crisis World.”

Starting today, aspiring reporters can upload a video of themselves explaining why they deserve to attend the forum, responding to one of three pre-selected questions. For example, “If you were given the opportunity to take one person (living or historical) to Davos in order to make an impact on the conference, who would it be and why?” Entrants must keep their answers to 90 seconds or less, so I wonder if those crazy speed-talking college debate kids will have an advantage.

The winner will be selected by a panel of expert judges, including Huffington Post founder Arianna Huffington and MySpace co-founder and chief executive Chris DeWolfe. The prize includes an all-expense-paid trip to Davos, a press pass and “Congress and Media Centre access.” The MySpace community doesn’t get to vote, but users get to rate their favorites.

What’s unclear is exactly what this MySpace correspondent will get to do besides write about the experience on a special MySpace blog linked to the Wall Street Journal’s web site (the blog won’t be part of the WSJ’s coverage of the forum). They will also attend a lunch with Wall Street Journal editors, and “upload conference photos and interact with other reporters on-site,” according to MySpace’s press release. Fortunately, Davos is also the largest ski resort in Switzerland. Schuss!

While my idea of the average MySpace user (a 16-year-old who overuses acronyms — LOL — and loves sparkly things, iPhone applications and Beyonce) doesn’t totally mesh with the idea of the average Wall Street Journal reader (a 52-year old male who enjoys traveling, the opera and golf), the partnership between MySpace and the Wall Street Journal makes sense. They’re both owned by News Corp, Rupert Murdoch’s mega media empire. Interestingly, anti-globalization activists frequently stage protests in Davos against what rocker/philanthropist Bono has called the meeting of “fat cats in the snow.”

This isn’t MySpace’s first time at the citizen journalism rodeo. The social network previously partnered with the New York Times for a contest to send two individuals to Africa as traveling companions to columnist Nicholas Kristof. The winners posted reports and videos to a blog on NYTimes.com, with excerpts available on MySpace and mtvU. MySpace also hooked up with NBC to send correspondents to the Democratic and Republican conventions last fall. So, snickers and “OMG, economics!” comments aside, it’s clear that the winner of the Davos contest will not be stumped by the questions on the application. Although one of the official entry questions on the contest site and press release is confusing me, if only for its lack of proofreading (perhaps the contest winner can also add copyediting to his or her duties): 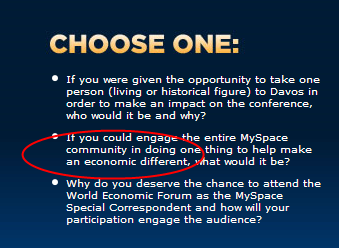