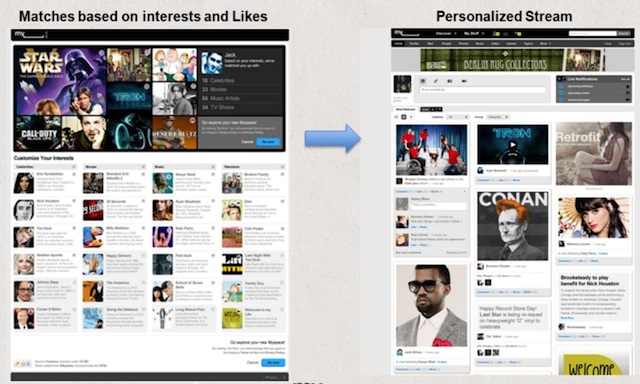 “MySpace is very committed to the new strategy of social entertainment,” Jones said.

In other words, Jones suggested that MySpace has more or less given up on competing directly with Facebook to be your primary social network. Instead, it wants to be a site where users can consume media that’s tailored to their interests.

Specifically, MySpace announced a new product called Mashup with Facebook, where MySpace uses Facebook Connect to import the books, movies, music, and TV shows that you said you liked on Facebook. MySpace then builds customized a page for you around those preferences. The feature will be rolling out to users today.

Mashup with Facebook doesn’t seem to reflect a big change in the relationship between the two companies. Instead, it continues the direction that MySpace has pursued for a while. The News Corp-owned site has made it pretty clear that it’s trying to focus on media and content as a way to avoid competing directly with Facebook. Hence the announcement in August that MySpace users could cross-post their status updates onto Facebook. And hence the “social entertainment” focus of the new redesign.

“From our perspective, we’ve always been a big believer in focused innovation,” said Dan Rose, the company’s vice president of partnership and platform marketing. “This is a great example of MySpace’s new direction which is very focused on entertainment.”

Speaking of the redesign, I asked Jones how it’s going. He said the redesign has only been live for all users for a few days, but that “the core MySpace audience” does seem to be visiting more frequently. Jones added that with the redesign, MySpace is also developing new measurements to judge user engagement.