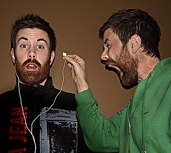 Social networking site MySpace and music have worked well together in the past. New bands got recognition, popular bands gained new fans. Now MySpace is looking to extend that relationship by launching a full-scale music store. This launch will be happening sometime within the next 5 days, according to Reuters.

The service will be appropriately titled “MySpace Music”, and is said to have the support of at least 3 of the major labels. Sony BMG Music Entertainment, Vivendi’s Universal Music Group and Warner Music Group Corp. would each have a stake in the new service along with MySpace parent News Corp. It is not clear if the other big label, EMI, is involved.

None of the companies are talking, so details are scant at this point, but the service is said to be a direct competitor to Apple’s iTunes. It’s well known that the record labels have long thought that Steve Jobs has held too much over their industry. Their slowness in delivering DRM-free music to iTunes while giving it to AmazonMP3 may be helping that service grow (our coverage). MySpace Music could well be an attack on another front.

The fact that EMI is not known to be involved in the MySpace Music partnership makes sense as well — EMI is still the only major label giving Apple DRM-free music, so they presumably have a pretty good relationship.

MySpace Music is launching now because News Corp. and Universal Music have finally settled a longstanding lawsuit, according to Silicon Alley Insider.