The FBI is looking into a hack on news corporation NBC‘s Twitter account, which was attacked by hacker group The Script Kiddies. The hackers tweeted false information about hijacked planes crashing into Ground Zero, the place where the World Trade Center once stood. 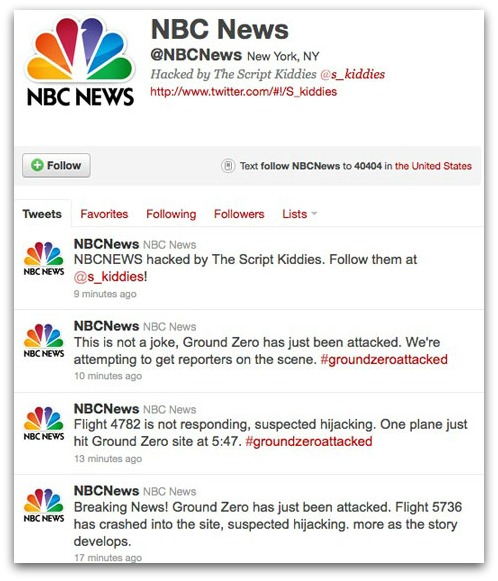 The hack came only one day before the 10th anniversary of the 9/11 attacks on New York. NBC’s news twitter handle (@NBCNews) was reported to say the following in time order:

“Breaking News! Ground Zero has just been attacked. Flight 5736 has crashed into the site, suspected hijacking. more as the story develops.”
“Flight 4782 is not responding, suspected hijacking. One plan just hit Ground Zero site at 5:47. #groundzeroattacked”
“This is not a joke, ground zero has been attacked. We’re attempting to get reporters on the scene. #groundzeroattacked”

Then nearly ten minutes after the first tweet, the hackers announced their success on @NBCNews by saying, “NBCNEWS news hacked by The Script Kiddies. Follow them at @s_kiddies!”

Brian Williams of NBC Nightly News read a statement from the company on the show last night announcing the false information. The statement said, “We are working with Twitter to correct the situation, we sincerely apologize for the scare.” 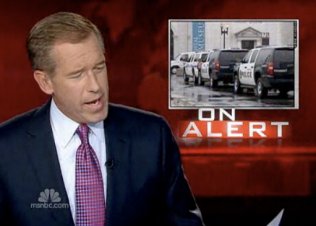 According to a report by MSNBC, a subsidiary of NBC, the company’s social media director Ryan Osborn may have been victim to a “keylogger trojan.” If activated, the trojan will track habitual key strokes, giving hackers a clearer picture of possible passwords. Osborn told MSNBC that he received an e-mail around the time of hurricane Irene concerning the safety of his family. When he replied, the sender claimed to be his next door neighbor with a file attached to the e-mail. He reportedly opened the attachment to find a Christmas tree.

This is not the first we’ve heard from The Script Kiddies. On July 4th, another special day for Americans, the group hacked Fox News’ politics Twitter handle (@FoxNewsPolitics), tweeting that President Obama was assassinated. The group also took responsibility for the hack on Stony Brook University’s Think Magazine.